Stoleshnikov or Petrovka : What did Tolstoy and Chekhov prefer?

«coming into the dining room, Stepan Abramovich saw to his horror that the port wine and sherry were taken from Despres, not from Leve, and ordering the coachman to send as soon as possible to Leve, he went back into the living room”

Anton Pavlovich apparently, chose another supplier. Chekhov in the story, «Drama on the hunt,» wrote:

“- Excellent liquor! — He said, putting on the table instead of «remarkable» drawings, pot-bellied bottle with a wax seal Benedictine

— Passing through Moscow from Despres took. Would you, Sergei? ”.

But not only Chekhov was an admirer of Despres: apparently, and Herzen was his connoisseur: A.I Herzen wrote («Past and Thoughts.»): «Wine, of course, taken on Petrovka, from Despres.» There is a mention that Nikolai Gogol opened a loan from Despres, looks like he visited the store often.

So who are Despres and Leve, and to what address, coachman  from “Anna Karenina” was been sent for port wine and sherry?

A Giljarovsky (here is — a true connoisseur!) In the book  «Moscow and Muscovites», recalled:

«- So that the wines were from Despres: cognac №184, port wine № 211 and № 113 … With a pink label … You know? — Orders the veteran merchant, studied fashion brand in restaurants while tasting. »
Giljarovsky also mentioned about the existing forgery wine Despres — instead of the two-headed eagle sticker adorned with a raven. The “deal” was closed up in a court.

Officer of the French army Camille Philippe Despres, wounded at Borodino, was a founder of supply and wine trading business.  It is said that there has not been without nurses (Anna Riss, French Muscovite from a merchant family), which took care of the wounded officer and then became his wife. In the realm of the family on Petrovka  the store which offered French wines in Moscow was opened.

Giljarovsky wrote all in the same book, «Moscow and Muscovites», in chapter  «Pubs» about Leve: «At the same moment two servants (Mascaron.org: called that time “polovoy”) dragging huge trays. Kuzma looked at them and disappeared into the kitchen. Immediately on the table lined cold Smirnovka in ice, English bitter, Shustov Brandy and Leve port wine No.50 next to the  Picon bottle. Another two carried two hanging ham, sliced transparent pink, paper thickness slices. Another tray, on it pumpkin with cucumber, fried brains were smoking on black bread and two silver jug with a gray granular and brilliant — black achuevsk pressed caviar.

For sure our “Greats” knew a lot about «the matter»,  and certainly not once they had been here,  as recognized,  Moscow best wine stores … Both branded stores trading houses of  Despres and Leve were located in the center of Moscow, and separated them no more than two hundred meters. The Despres Store is located on Petrovka house 8 (wall to wall with Petrovsky Passage), and  Lowe Store — in Stoleshnikov house. 7 Of course tasting port wine from Despres or Lowe are too unlikely for us now, but to take a look like the facades of the stores looked at least is still possible.

The current building, «Store foreign wines and cigars, a provider of the highest court K.F. Despres” at the end of the 19th century — in 1898 instead of the old, dilapidated, was built by architect Roman Klein. Incidentally, in the same period (from 1896 to 1912) and Klein led the construction of the Museum of Fine Arts (now — Pushkin). But at a fairly eclectic façade of Despres store Klein has found a place for the two small panels, clearly pointing to the «nature» of this store: on the side walls of the bay window, on the second floor housed a small composition with male figures, bearing vines. 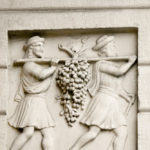 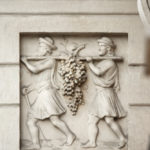 View the location on a map at this link — http://mascaron.org/?pid=1868 (to see the panorama of the street, use the option StreetView — drag the yellow man on the street next to the object)

New, (now partially preserved its facade) building for the shop «Trade House» Yegor Leve «- foreign and Russian wine» in 1903, was built by architect Erichson.  The decor of its facade of tis building in Art Nouveau style is also clearly indicated its assignment.  Both female mask, made in the form of the germ, decorated with vines. Unlike Despres, who specialized in imported wine, Unlike Despres, who specialized (mainly) in imported wine, Egor Lowe traditionally offered except foreign, and wines of Russian Empire: the Crimea, Taman, Georgian ….. 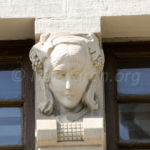 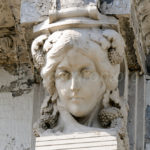 View the location on a map at this link — http://mascaron.org/?pid=181 (to see the panorama of the street, use the option StreetView — drag the yellow man on the street next to the object)

Soon after the October takeover, a century of which will be in this 2017, Despres shop ceased to exist, and wine store room Lowe for a long time continued to exist until it was replaced by the store hours.