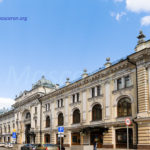 Passing on Neglinnaya Street can not miss the building, an ornate sculptural decoration: there are different masks and mascarones on the facades, and the roof is crowned with numerous sculptures. In the «bustle of the city» rarely stop to consider carefully these wonderful images and most people, passing here, is simple does not notice that the horses’ hooves instead of fins. This is the hippocampus — the sea horse,  on which God Seas Poseidon passing the oceans. 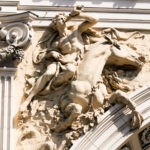 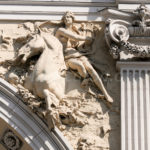 It is necessary to look closely and you will find immediately that under the hooves, sorry ! under the horses flippers a marine life — fish is splashing. And the central mascarons most likely is depicted by the god of the seas — Poseidon. 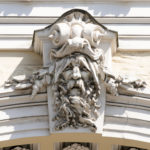 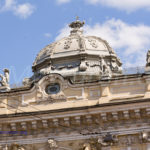 There are also some other images on the facade 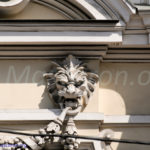 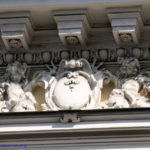 This is no accident. In 1896, Catherine Firsanova and her husband businessman Gonetskiy build a new complex of Sanduny baths. Building on Neglinnaya 14, built in the general style of the whole complex, was intended for renting apartments and commercial premises. And its “membership” in the Sanduny complex explains the sea, the water theme of the building decoration.

As it may seem strange, the very same story of the emergence of Sanduny baths in Moscow are connected with the two women. In the late 18th century in St. Petersburg well known actors Sila Sandunov and opera singer Elizabeth Uranova played out, but not on the stage and on the stage of «life» love story. Elizabeth Semenovna Uranov, St. Petersburg Theater School pupil, was recognized not only as a great opera singer, the most marked attention of Empress Catherine II, but also as almost the first beauty. Many courtiers sought her favor. Among them was the Vice Chancellor of the Russian Empire Count Bezborodko who decided to thwart the marriage of Elizabeth with her chosen one — Sila Sandunov. There is a tradition of almost a detective story — Count Bezborodko ordered to send Sandunov in Kherson, but Elizabeth during her performance on stage has miraculously managed to pass a petition to Empress. Sandunov was returned from his road to St. Petersburg, the Empress bless his marriage with Elizabeth Uranium and even gives them a diamond placer.

Through ingenuity of Elizabeth Uranova, as well as women’s solidarity and generosity of Catherine II Sanduny was appeared in Moscow:  after marriage  Sila and Elizabeth moved to Moscow, where based on diamonds donated by Empress Sila Sandunov buys while stinking wasteland around the Neglinnaya River. In 1806  Sanduny baths appeared. In 1816 Neglinnaya was hided in an underground collector .  And so the attractiveness of the area as well as of well organized baths, which was already managed by  Elizabeth Uranova after the divorce has, increases dramatically, pulling almost all the Moscow Society.

New complex of baths, including building on Neglinnaya 14 was built already the end of the 19th century with the use of modern technology for that time. And the water is not supplied from the Neglinnaya but from Moscow River on a specially laid pipeline. Apparently, at any time some kinds of renovations do not attract everyone by their innovations, especially old-timers will always remember that «the grass used to be greener.» So Giljarovsky recalls what saying Anton Chekhov, who briefly lived in the newly built house on Neglinnaya 14 in an apartment on the first floor overlooking the alley in Zvonarsky. Giljarovsky wrote: «Long before Gonetskiy being remade Sanduny bath into the palace, Chekhov liked to stay in the old Sanduny baths, cozy, without luxury and unnecessary shiny tinsel.» Well, now we just have to look at this very «shiny tinsel» and regret of installing  of the insane abundance of road signs by the new authorities….