(«Seventeen Moments of Spring» – was one of the famous film devoted to Second Wold War, main hero was Stirlitz – Russian scout )

From «old»,  «previous» life  many, is likely, remember  stories like Tatiana Lioznova chose scenery in cityes for the filming of this movie … Riga, others cityes in GDR (for those who have forgotten or do not know — the German Democratic Republic … 🙂  ) became full-fledged «actors», which formed the atmosphere of the film. But, as it turned out one other actor successfully passed the casting and appeared in the movie in albeit a small cameo role of the «capital of the Reich», as it may seems surprising, was …. Moscow. 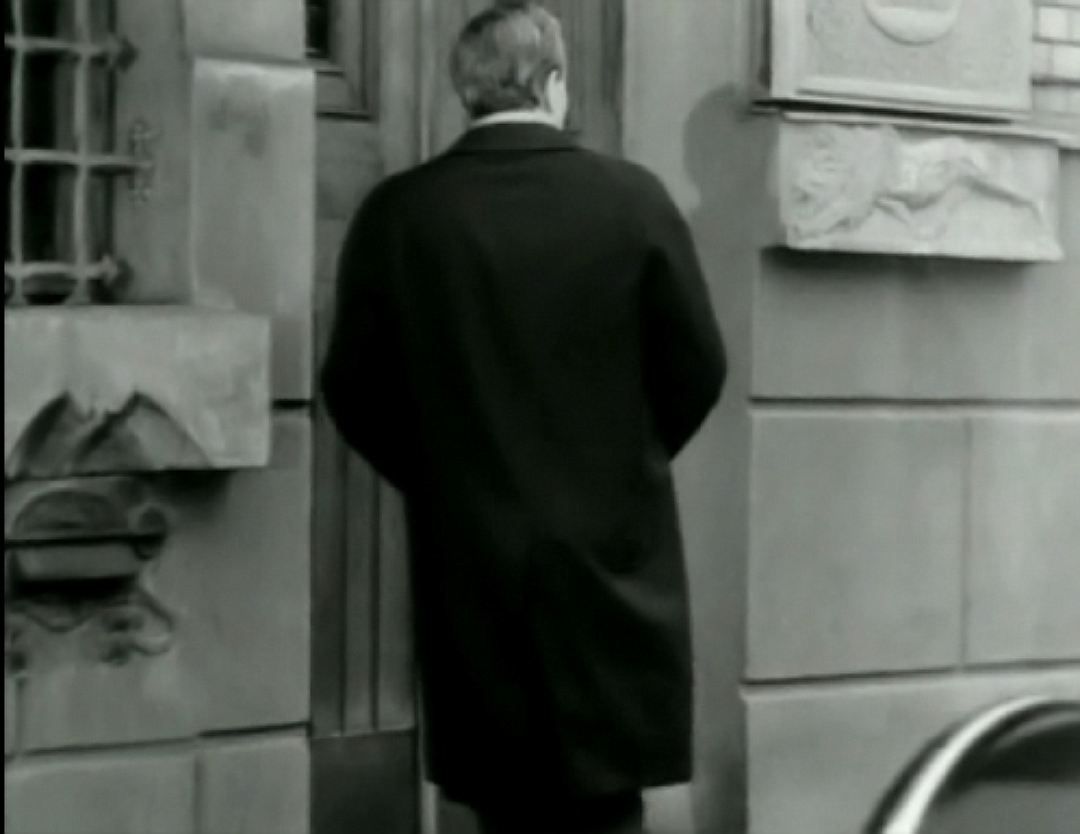 Here are two frames of the movie: the first Stirlitz drove up to a safe house, where the Gestapo placed radio operator Kat. In the second frame Stirlitz already coming to the door of the house. Surely, watching the movie there was no time, and any possibility, to draw attention to two «sign» at the door — a lion and a stylized bat to the left of the door.

Here are two pictures, the present day — the same house (only there isn’t the tree 🙁 ) and the same characters — a lion and  stylized bat. 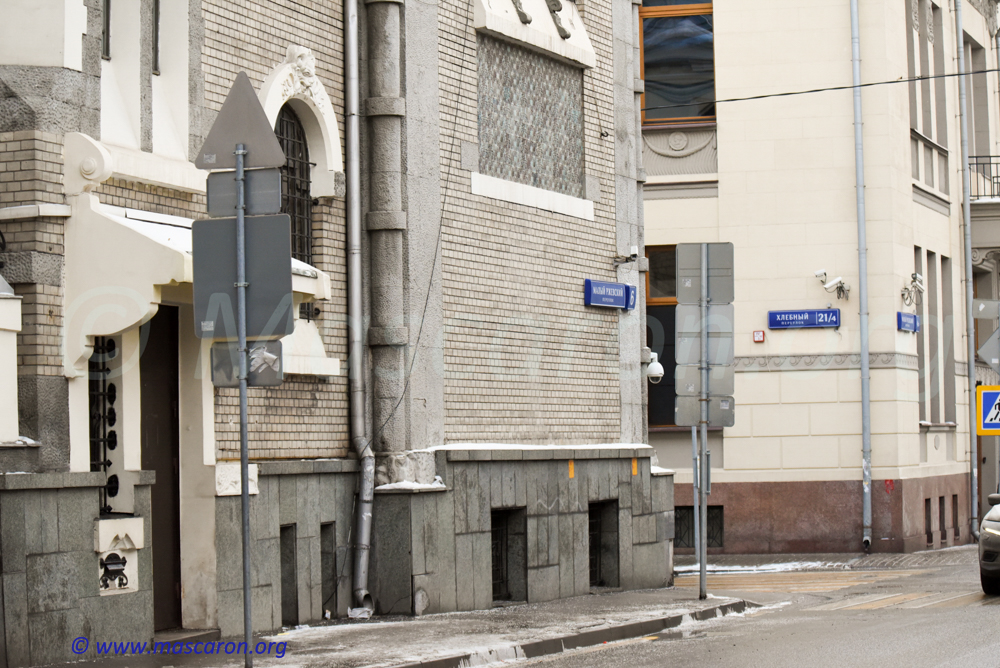 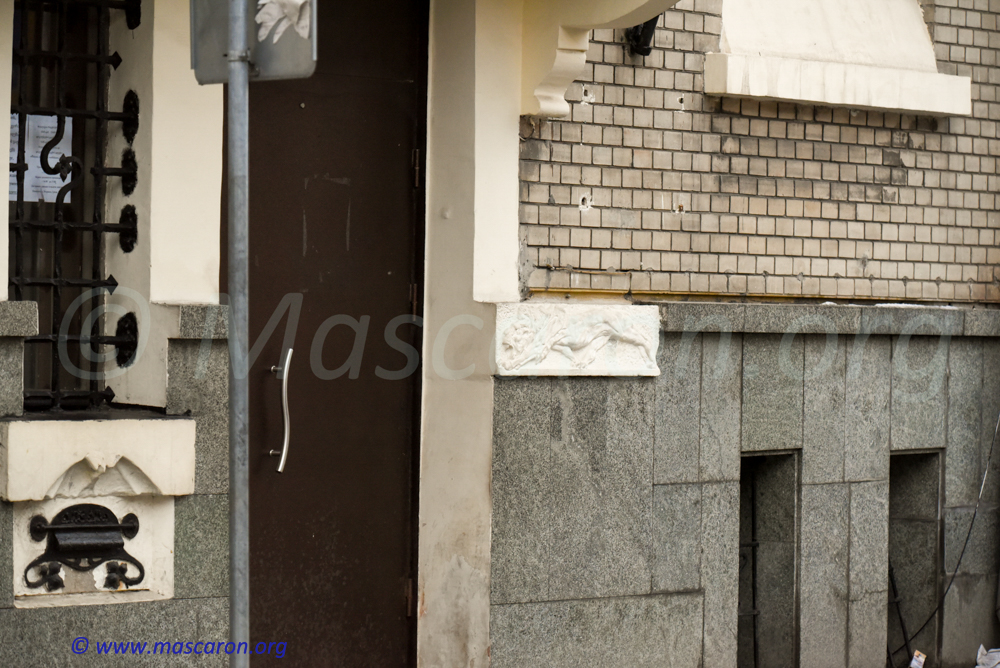 This house is located on the corner of the Lesser Rzhevsky Bread and alleys, just a couple of minutes to go from Nikitskaya. Architect Sergei Solovyov the professor built himself a mansion in the 1901-1902 years. And for the decoration of facades, he invited sculptor Nikolai Andreyevich Andreyev (the one that is already made and later Gogol monument in the courtyard of the house-museum, and then sculpted and Lenin J) and Yakunchikova artist, who performed the remarkable ceramic panels and mosaics. But it was an amazing Andreev attributed its diversity carved decoration of facades, which blends harmoniously into the intricate and stresses characteristic of Art Nouveau architecture of the building. Terrible picture of a lion is designed, obviously, to protect the home, and the stylized image of a bat, which is often associated in the tradition of ancient Greece and Rome to the vigilance and discernment, is designed to protect the mail. This bat as it closes its wings is not nothing but a slit for receiving correspondence stylized mailbox. 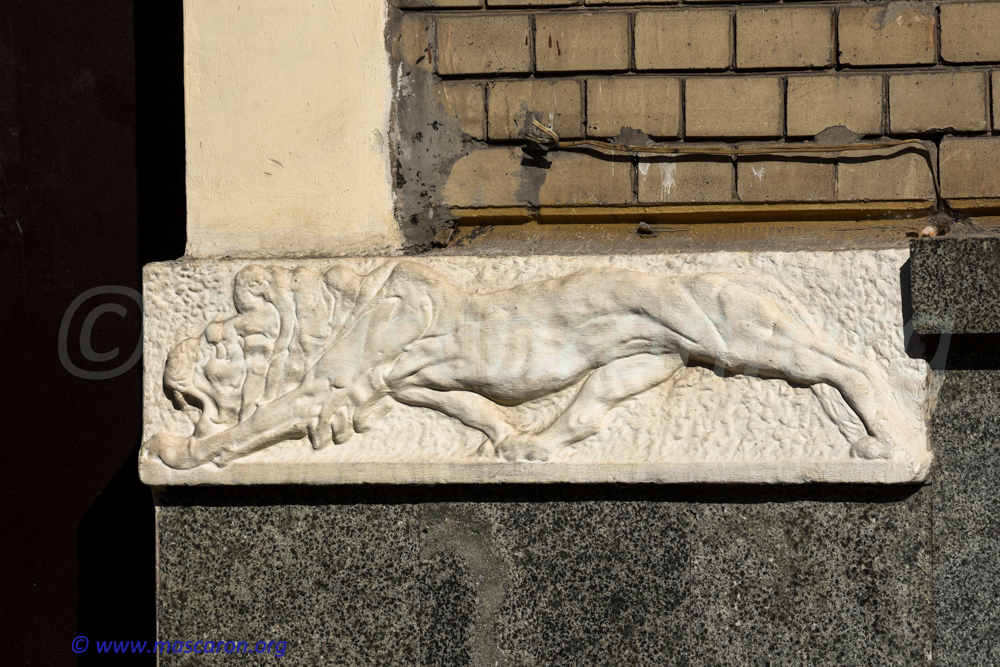 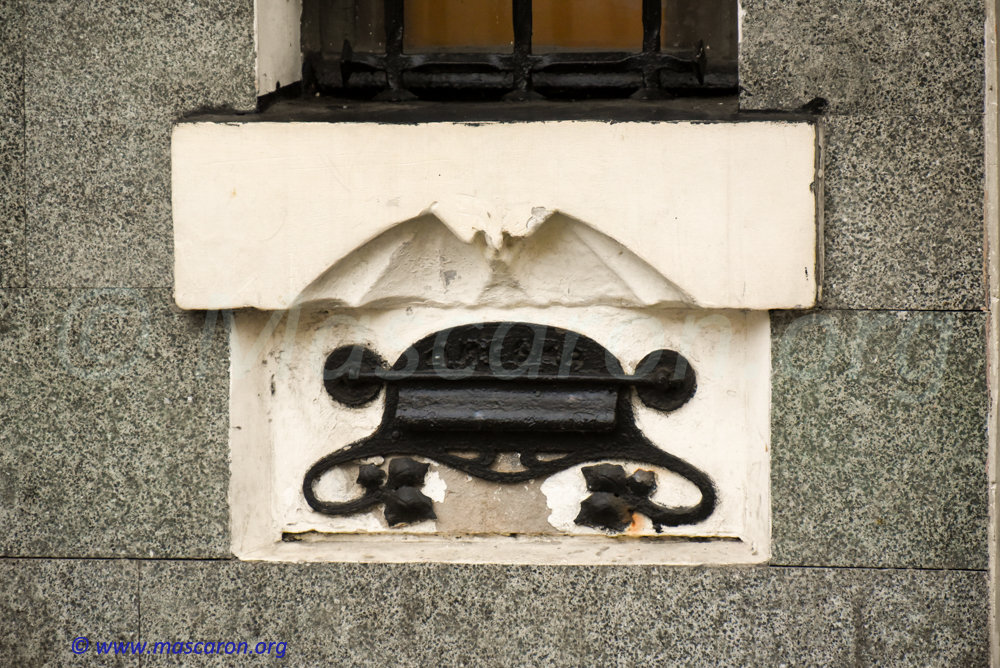 This house is located on the corner of  Malyi Rzhevsky and Khlebnyi alleys, just a couple of minutes to go from Bol’shaya Nikitskaya. Architect Sergei Solovyov  built himself a mansion in the 1901-1902 years. And for the decoration of facades, he invited sculptor Nikolai Andreyev (later he made  Gogol’s monument in the courtyard of the house-museum, and then sculpted and Lenin) and Yakunchikova artist, who performed the remarkable ceramic panels and mosaics. But it was Andreev to whom attributed his amazing diversity carved decoration of facades, which blends harmoniously into the intricate and stresses characteristic of Art Nouveau architecture of the building.  Panel with   terrible lion is designed, obviously, to protect the home, and the stylized image of a bat, which is often associated in the tradition of ancient Greece and Rome to the vigilance and discernment, is designed to protect the mail. This bat as it closes its wings is not nothing but a slit for receiving correspondence stylized mailbox.

Architecture of Art Nouveau style amazing teamed with symbolism, also widely used in the works of many artists, sculptors and writers in the early 20th century. Surprisingly, the architect Soloviev built only house in the Art Nouveau style and he invited,  the artists, whom apparently he knew, and who were willing to share his «experiments» of combining of two directions: Art Nouveau and Symbolism. In this regard, special attention should be paid to sculpture (from Khlebnyi lane), which as it were crowning 4 panels — allegory made Yakunchikovoy artist — sculpture, painting, architecture and music. At first glance — it is Pallas Athena, which is believed to be patron of the arts and crafts. The owl is often depicted with Athena (with snake), symbolizing an wisdom. At first glance — everything is logical, if not one «but.» It is impossible not to draw attention to the bat wings, obviously «owned» this woman, without any doubt, it isn’t right — bat wings isn’t an attribute of Athens. 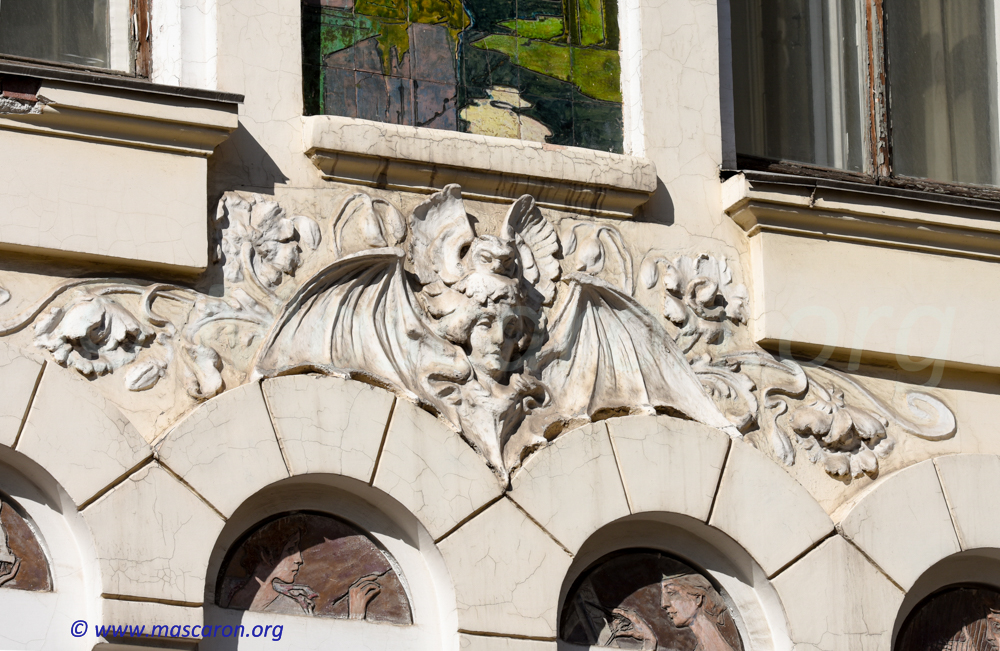 This composition, creating some filling of apprehension and anxiety, is echoed another image, (this time bred on the facade overlooking to Malyi Rzhevskij) — a mysterious creature with the face of either a lion, or a dog, and, apparently, with the tour horns. Obviously awesome, warning image, which, together with others, and with elements of forged fence emphasizes security at home. 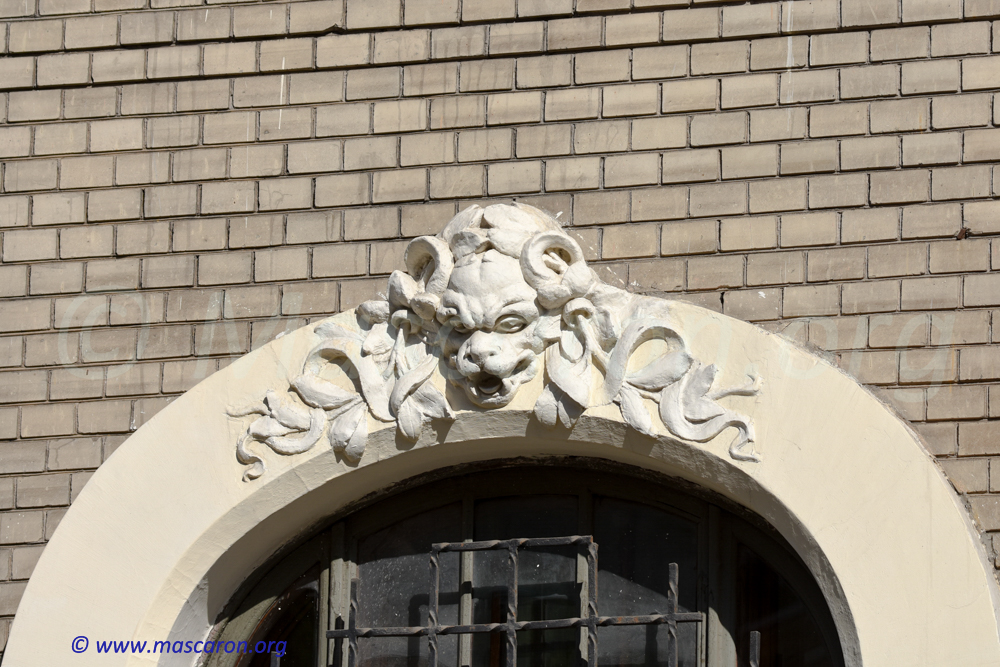 In case of this general semantic context «symbolism» of the house, the female image, surrounded by an owl and bat wings, it would be logical to read the image of Lilith — the first wife of Adam, the created, like him from clay.  But she dared to engage him in an argument, and to insist on their right to equality as beeing created like himself as Adam. This story, which is partly preserved only in the earliest manuscripts (including the Dead Sea Scrolls) followed by a variety of bearded scribes and their employers had been «forgotten», and the place of Lilith, which left (ie, dumped) Adam, took a created for him Eve, as a consolation and more accommodating. Apparently, such an obedient wife was attractive to these «authors» of history, and flattered their vanity. Well, about Lilith, the legend says that she turned either into the night the evil witch, or «fairy» — that is a meaning of owl and bats — still to be appeared to        lads in the night visions. Maybe that image on the house Solovyov was designed to protect its occupants from uninvited night «guests»?

A pair of owls, located in the grounds of the corner pillars of the house, support the night image too. These owls, like the lion and the bat, actually are white stone carvings, made by sculptor Andreev. By the way, under the wing of these owls lurk chicks … 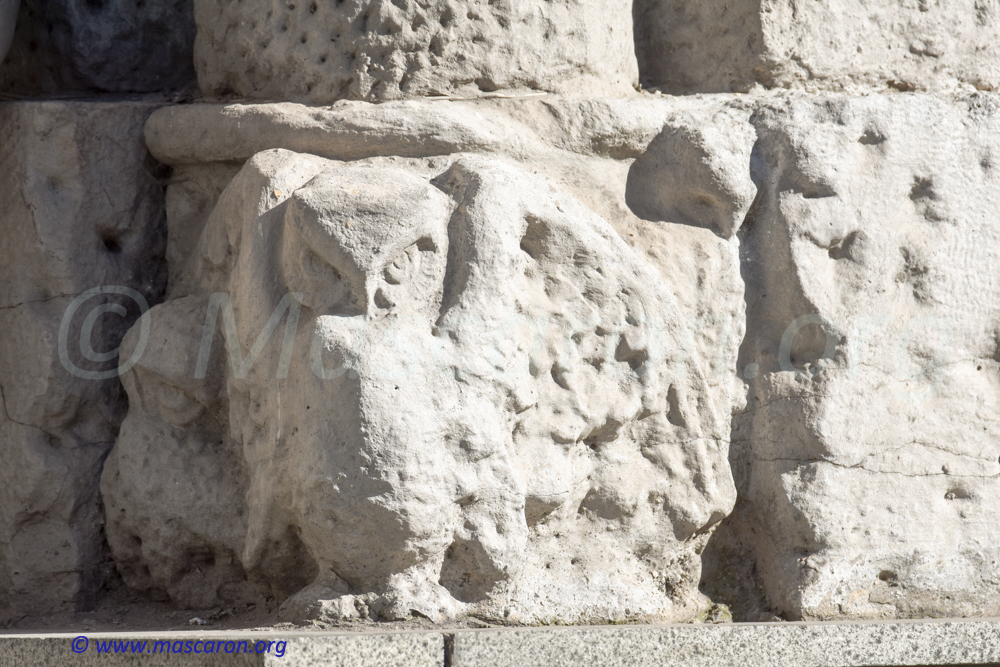 The architecture itself, as well as a rich and meaningful facade decoration can      not leave unnoticed the house, located in the Arbat lanes. Maybe so, and also so a tricuspid window exist on the second floor, some researchers of Bulgakov’s creativity believed that this mansion of Solovyov placed on corner of  Malyi Rzhevsky and Khlebnyi  lanes was the home of Margarita, although many other «signs» from the novel do not coincide.

Returning to the film » Seventeen Moments of Spring «, in fairness it should be noted that a few others locations in Moscow, played the role of «Europeans». So a scene in a Swiss restaurant where Stirlitz waited his connected, but «a lady with the fox» still tried to win his attention,  was filmed in the cafe Lira. Here the first Moscow McDonald’s on Pushkin square will be opened later.