Anna Mons, Peter I and lions.

Authentic monuments dated earlier than 1812 remained not so much in Moscow, so it not possible to ignore the outstanding white stone carved lions dating back to 17-18 century, and miraculously survived to our days. Strictly speaking, these lions were connected not with Moscow as itself, but with Moscow’s suburb that time — with so called “German settlement” (right now Lefortovo district ). At present street Bauman street, d. 53, p. 8, in a closed area of a RCS’s factory the “remains” of stone chambers of Van der Gulstama, doctor of Tsar Alexei Mikhailovich, and later Tsar Peter still exist (hopefully). There is a legend in Moscow, that Anna Mons lived here. In 17-18 century she has become a favorite of the Peter I. Mr. Lefort introduced Peter and Anna. The gates of this estate were decorated with these wonderful carved lions. According to the dating of the lions — 17-18 century (and the legend itself) there is a high probability that Tsar Peter I could see these lions visiting Anna Mons in these stone chambers. 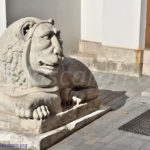 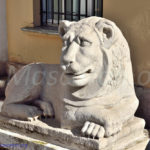 In the early 18th century in German settlement, there were about two thousand people, in many ways it was common European way of life and even their own, with special rights “government”. In fact, the German settlement was like a small European town in Muscovy, and these lions, even if only in part, but could to recreate it image.

Currently the lions are located at Pyatnitskaya 19 — in the courtyard of a classical 18th century mansion (On website www.mascaron.org point street — Pyatnickaya, # — 19 ), or follow the direct link http://mascaron.org/?pid=1818.  The Department of Cultural Heritage of Moscow is placed here. 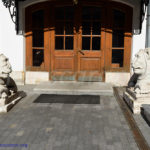 But, in spite of such a binding name, be ready to defend your legitimate constitutional rights if you want to take pictures of lions — as soon as the guards saw the camera, they starts ( Not legitimate !) to demand for a permission to take photographs heritage … It’s very strange cultural heritage …

But here, more wonderful! In St. Petersburg, on the “Promenade des Anglais” is the House of the Countess of Laval (house 4) — now the Constitutional Court. On the porch of the house lie two lions, looking at each other as well as ours, Moscow. 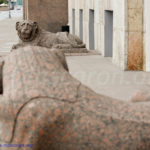 But still a more likely, so-called, «Vatican» lion should be considered as a prototype,or, if you want — a «model», for both Moscow and St. Peterburg lions.