The color of «Chameleon» as a historical heritage.

In the autumn of 2013, when the project mascaron.org began to form its photoarchive “house of Korobkova” (on site www.mascaron.org  enter street — Пятницкая , #- 33) has already been completely closed by construction mesh, restoration work had already commenced. Leo Kekushev created  this remarkable monument of the Moscow Art Nouveau in 1894: a project of the mansion, as well as  the interior and decoration of the facade — caryatids and herma, and also his “branded signature” — lions (http://mascaron.org/?pid=1389) and griffins (http://mascaron.org/?pid=1384). 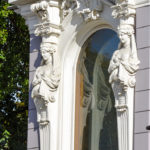 But what else makes this house unique is — amazing color design of the facade. Depending on the weather (lighting) conditions the color of the façade significantly changed — a real chameleon. When at the end of 2015, the restorers the mesh from façade, the  house presented this historical color of the chameleon. It is said,  miraculously preserved fragment of the original paint on one of an outbuilding  of the ownership was used to recreate the colors. 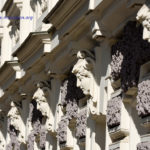 Preserved mention that the wife of Trifon Korobkov, who ordered Leo Kekushev the house project, Olga Korobkovа was extraordinarily beautiful.  In 1915, the budding young artist Alexander Gerasimov wrote her portrait. 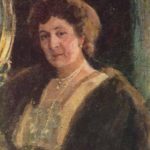 There is an opinion concerning the similarity of this portrait and images on the facade, although they are separated in time by more than 10 years. Any evidence or legends could not be found, so… there is only one way —  «turn on your imagination»

In the European tradition, a lion’s mask with mouth ring were often used . In most cases, these were «doorbell» on the gate. 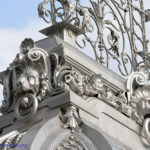 It is hardly to say that these Kukushev’s lions on the plafond on the roof of the mansion Korobkova were used for same purposes. There are several interpretations of the lion symbol with a ring in its mouth, but this is sometime in the following publications …