«Sorry for the bird!

«I will not remain silent here either! Comrades,

in the zoo tigers do not add meat he needs !!!»

There are cases when, first of all, parrots, begin to pluck their feathers. In addition to the purely natural «skills» of such kind of hygiene, there are often sad reasons for this «self-destruction» associated with stress or with banal boredom, when the owners lose interest in their pet.

But to eagle, which is already over 110 years, and proudly soaring «in the sky» in the heart of Moscow — on “Kuznetsky Most” street 3, building 2, began to lose feathers, this is something new in the world of ornithology (http://mascaron.org/?pid=2279 )  . What, unfortunately, can not be said about the protection of cultural heritage in Moscow ….

Profitable house MVSokol, was built in 1902-1903 by architect I.P.Mashkov, and the central mosaic panel «Eagle, hovering under mountains» is made by drawing artist N.N.Sapunov. This apartment house is built in the Art Nouveau style, more precisely — in a rare style for Moscow, associated with Vienna Secessionism. 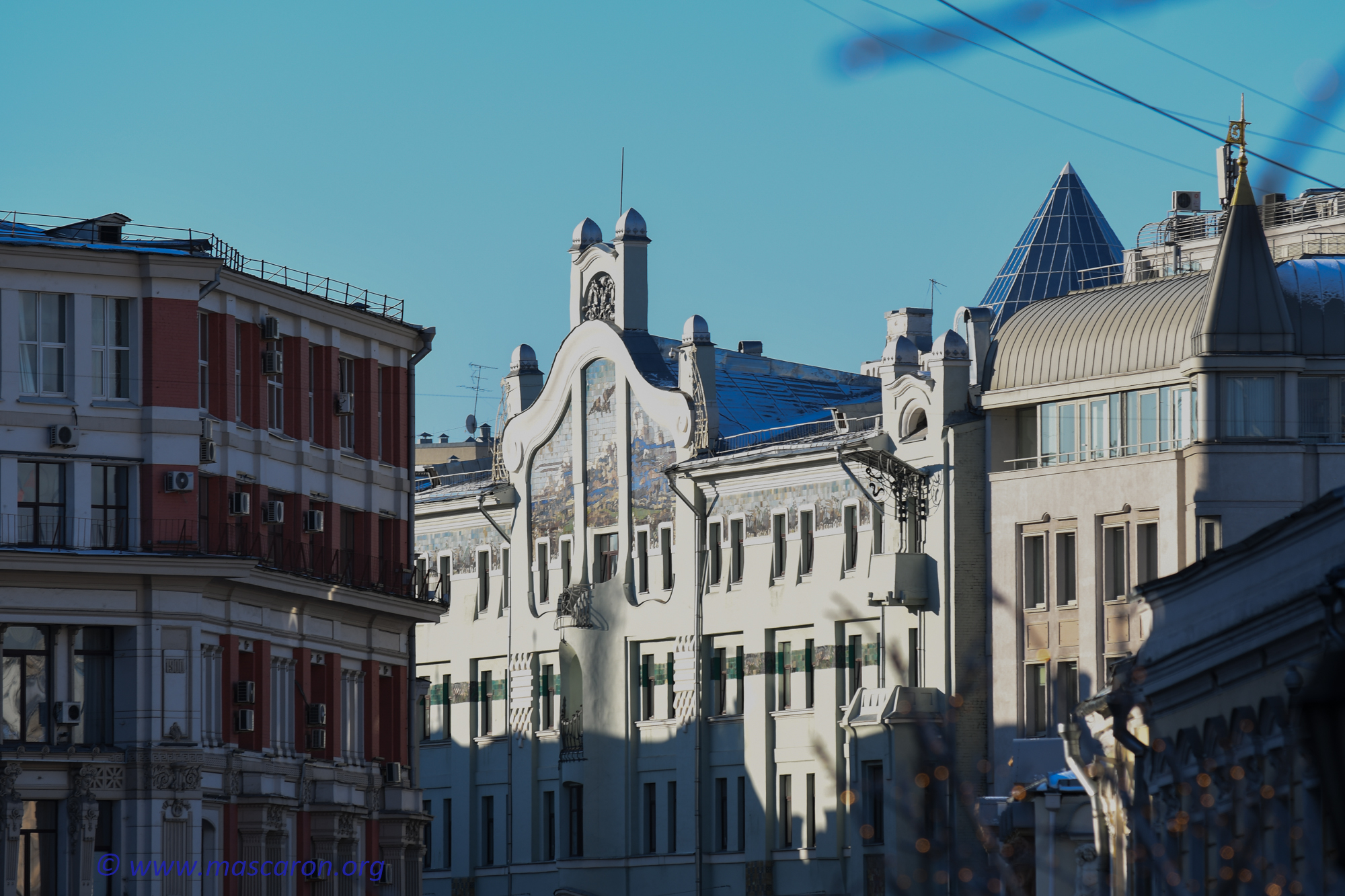 The unusual completion of the attic, underlined by the two pilasters ascending skyward, the free lines of the decorative lattices of the balconies (http://mascaron.org/?pid=2267 ), all this together does not allow the view not to pay attention to the house itself and to its majolica panel. It is worthwhile to imagine how this house looked before the two floors of house 6 were built over Kuznetsky Most, and there was not a so-called Berlin house (the corner of Petrovka and Kuznetsky Most), turret  of which is trying to «reach out» to «the classics”. It is believed that the panel with an eagle hovering over the mountains was a kind of replica to the decorative panel of the Metropolis. It is noteworthy that it is not so difficult to find a point — the intersection of Kuznetsky Most and Neglinnaya — from where both of these panels can be seen simultaneously!

This building is an object of cultural heritage of regional meaning, and it would seem that the condition of the bird should 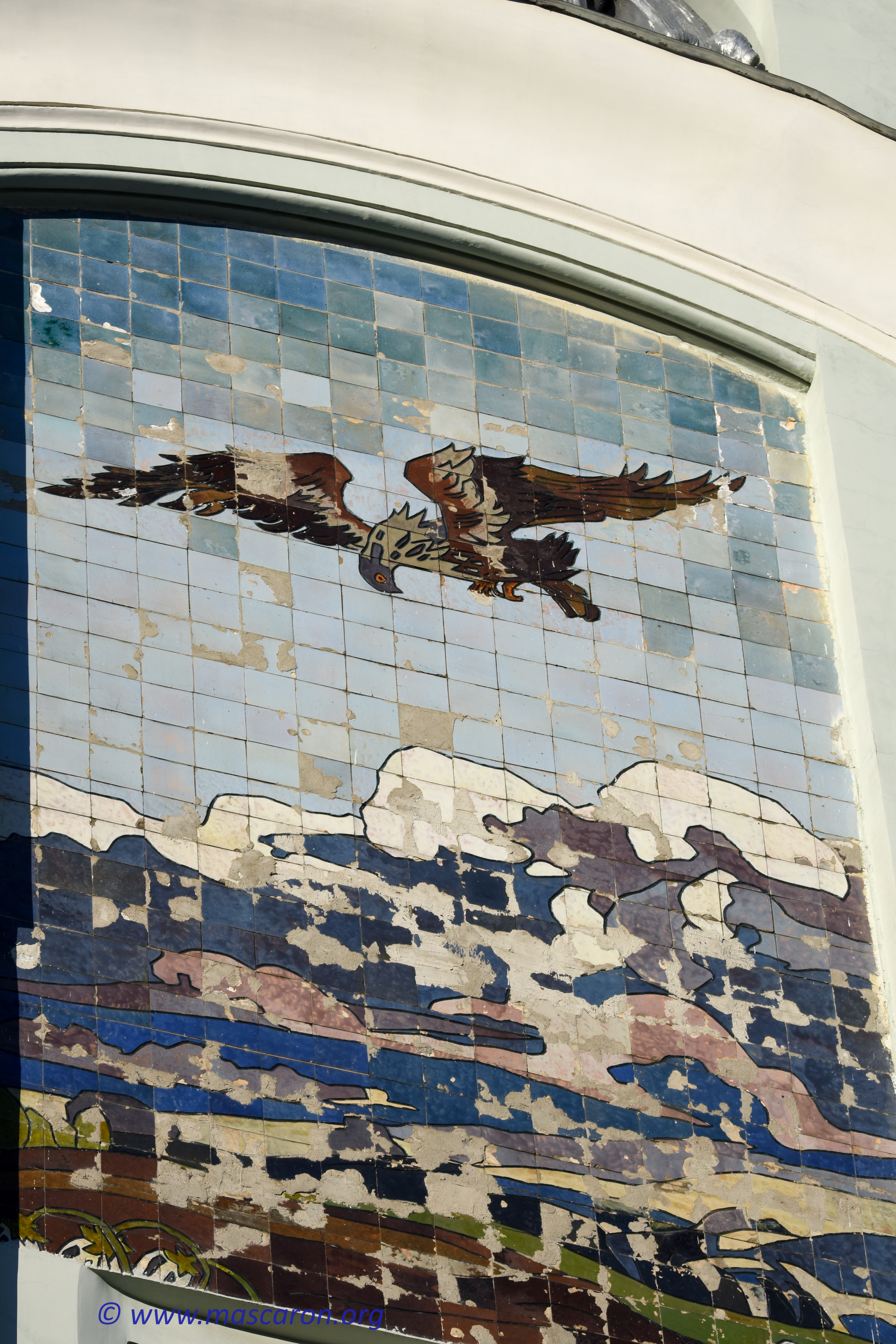 (and even is obliged by law) to disturb the Moscow authorities. But, apparently, this concern is only an appearance …. If you look closely, it becomes obvious that the mountains are turning, turning … not even in the plateau, but into something indescribable. 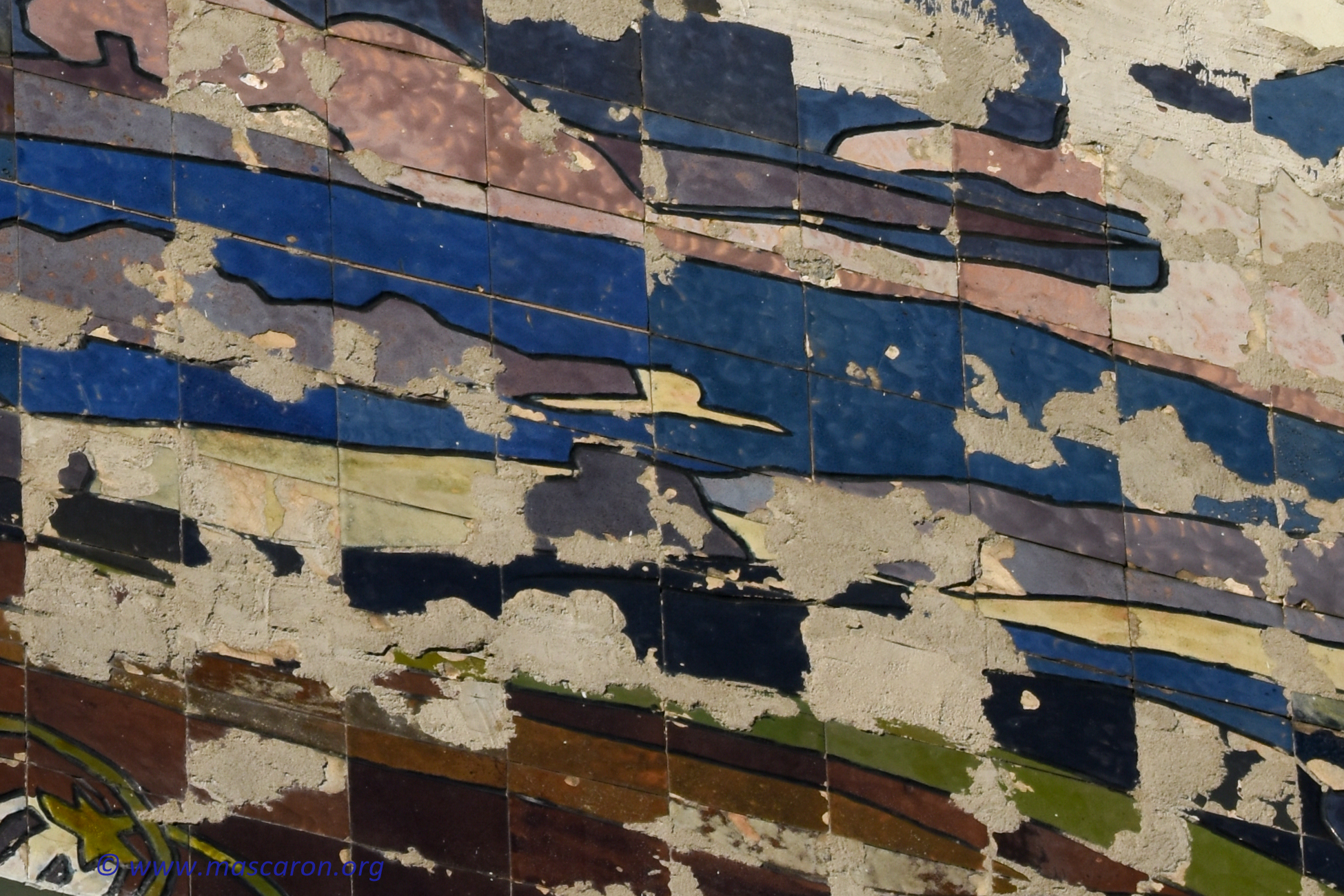 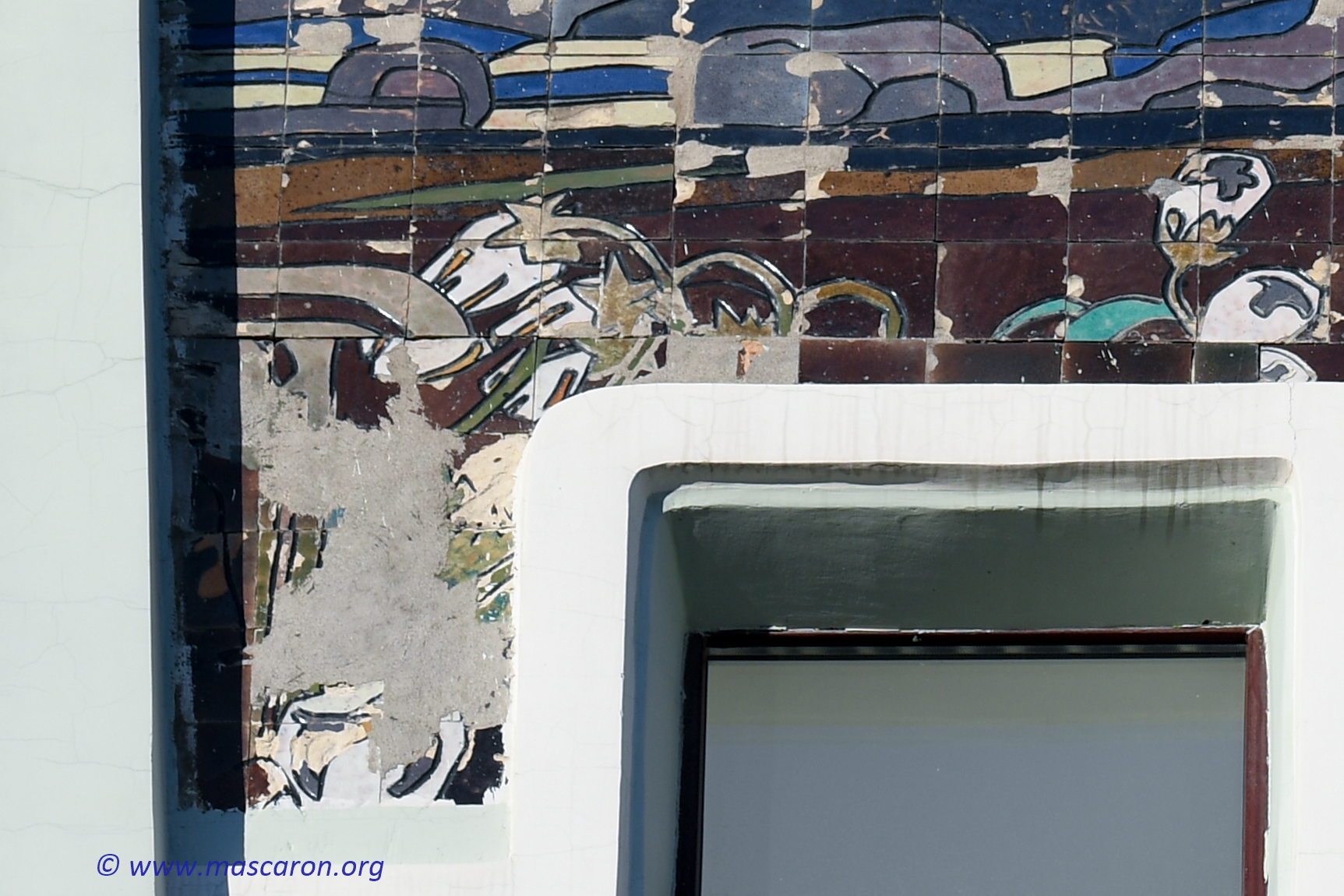 It is not a reason why the Eagle did not tolerate this disgrace and indifference any more and began, having learned from domestic parrots, to pull out feathers from the received stress. 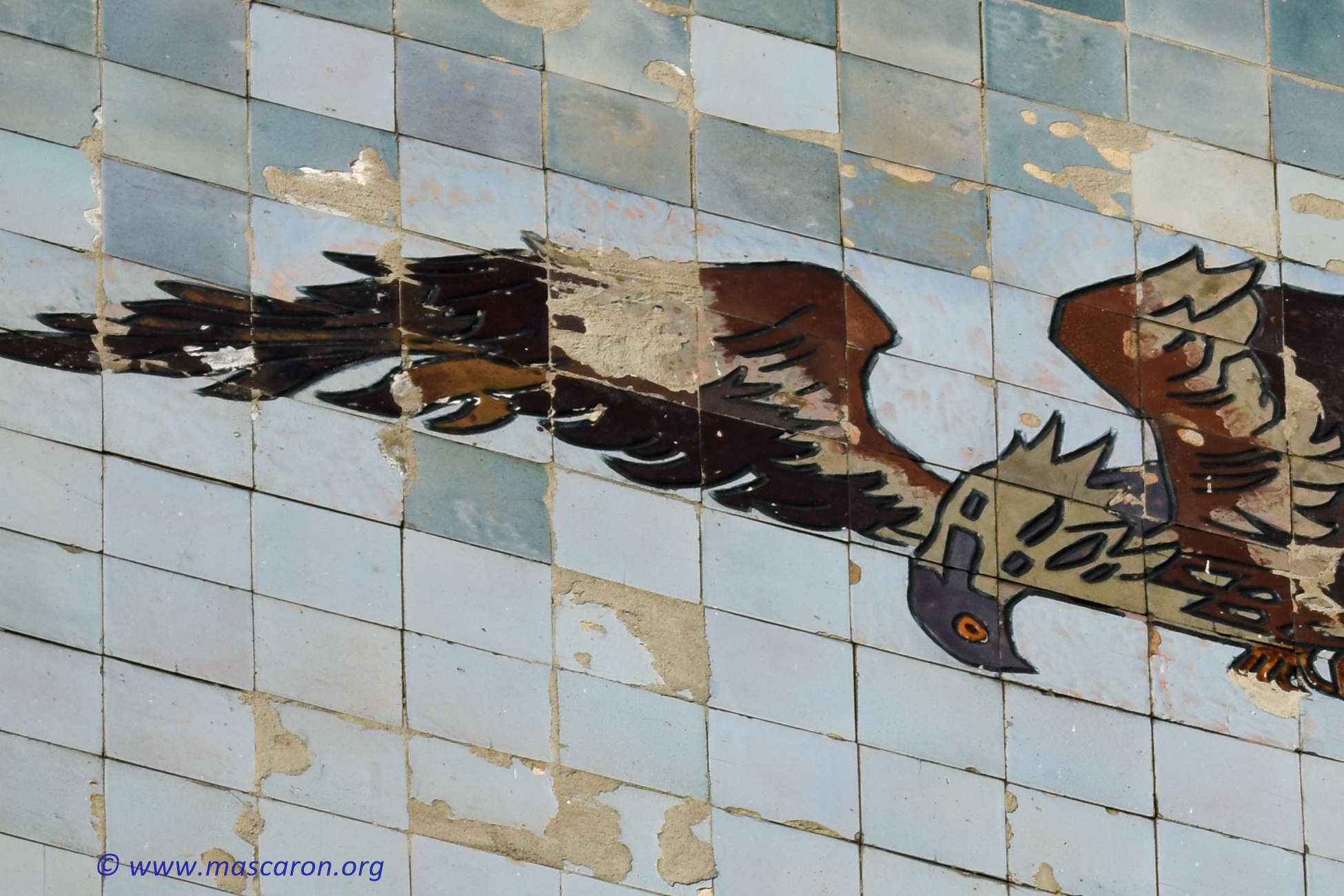 Whether inept hands, irresponsible attitude, and even worse — «manipulation» with the allocated budget for this cultural monument … but the object of cultural heritage is clearly not «getting its own» ….  remember well here know «tiger does not  get a  meat»!

It is to be hoped that the Department of Cultural Heritage of the Moscow Government will not wait until the «feathers» fly on their heads and take priority measures to preserve and then restore the panel, which is undoubtedly the adornment of our City.

And «sorry for the bird!