Passing through the Alexander Garden, near the Kremlin wall, you can not fail to pay attention to the Italian grotto «Ruins.» The creation of the «Kremlin Gardens», as they were originally called, is inextricably connected with the name of Osip Bove and  the victory over the Napoleonic troops. And the mainsail itself, in the base of which fragments of white-stone buildings suffered in the fire were used, according to the plan, Beauvais also symbolized the revival of Moscow, which was destroyed after the events of 1812. 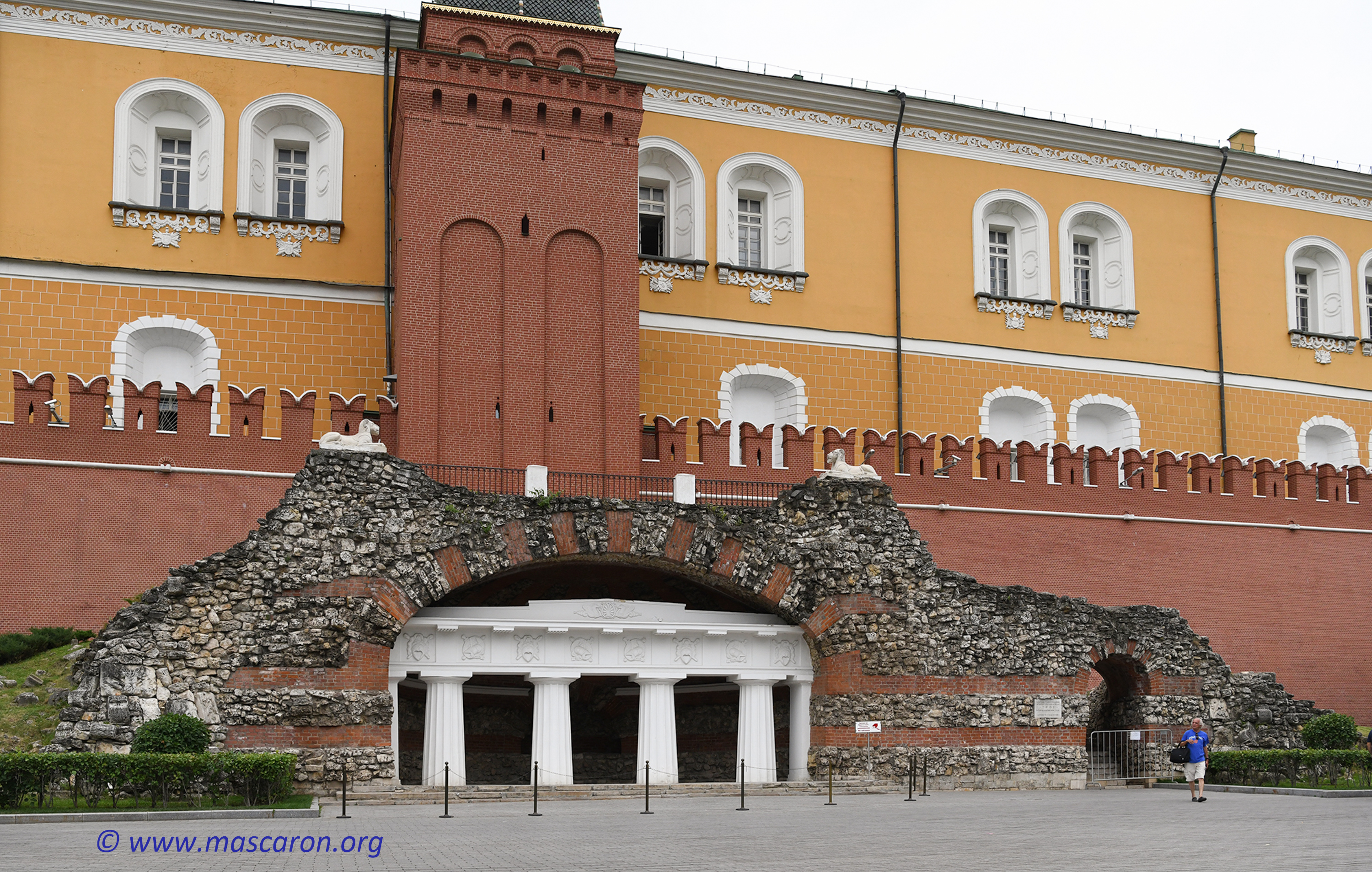 Looking at the grotto, listening to the stories of guides or reading the descriptions of this monument, as a rule, no one has any doubt about the historical authenticity of the current image of the grotto «Ruins». And a pair of lions, located on the sides of the upper platform of the grotto do not stay questions. It would seem that these white-stone lions are quite appropriate here — the lion, the image of power and strength, as it were, continues the symbolism laid in the design of the historical fence (architect Yevgeny Pascal), which contains fascia  (http://mascaron.org/?pid=1359 ) and medallions with images of the head of the lion and the gorgon.

But in reality things are not so simple with these lions on the grotto «Ruins»….
Turning to the official site of the Kremlin’s museums, we find: «… The Grotto acquired a modern look after the restoration of 1958-1959 … .. In this period almost completely lost columnar portico and fence of the upper platform with figures of stone lions were recreated …» (https: //www.kreml.ru/research/research-and-projects.sadovo-parkovyy-pavilon-grot/2004/). And in the publication «Architectural Monuments of Moscow Kremlin, China City, Moscow», «Art», 1982 in the description of the Alexander Garden and the grotto «Ruins» (p. 482) it says: «The upper hill area served for the orchestra; flanking its fence sculptures of lions were lost and now recreated by analogy. »
What kind did the grotto have before its «modern look»? Let’s turn to the photo documents. Here are photos of the grotto in the early 20th century — dating back to 1911, 1920. And also photographs of the late 19th century — 1890-1900 (1860th?)

But in reality things are not so simple with these lions on the grotto  «Ruins» ….
Turning to the official site of the Kremlin’s museums, we find: «… The Grotto acquired a modern look after the restoration of 1958-1959 … In this period almost completely lost columnar portico and fence of the upper platform with figures of stone lions were recreated …» (https://www.kreml.ru/research/research-and-projects.sadovo-parkovyy-pavilon-grot/2004//). And in the issue «Architectural Monuments of Moscow Kremlin, China City, Moscow», «Art», 1982 in the description of the Alexander Garden and the grotto «Ruins» (p. 482) it says: «The upper hill area served for the orchestra; flanking its fence sculptures of lions were lost and now recreated by analogy. »
How did the grotto looked like before its «modern look»? Let’s turn to the photo documents. Here are photos of the grotto in the early 20th century — dating back to 1910, 1911, 1920. 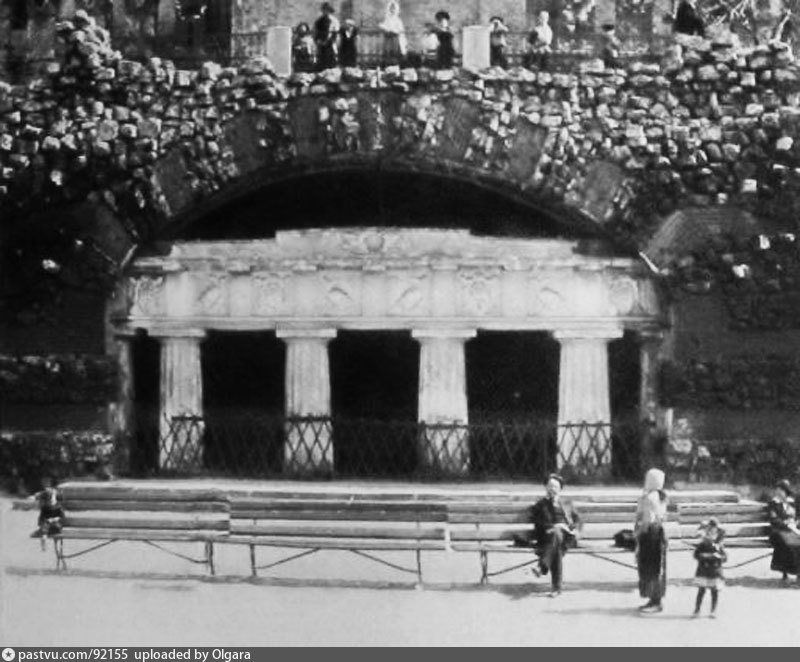 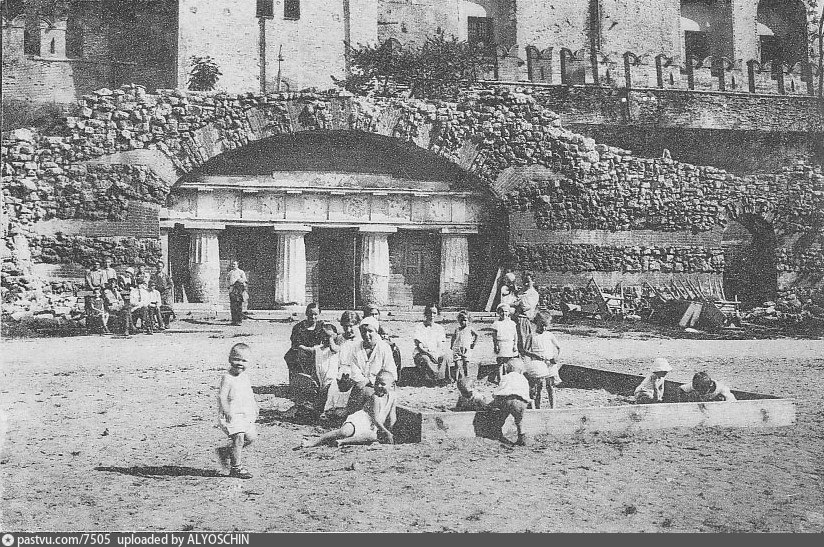 It is clearly seen that there are no lions «flanking the fence».

And also photograph of the late 19th century — 1890-1900 (1860th?) with great certainty it can be argued shows the right part of the upper platform of the mainsail, and there is no lion there either. 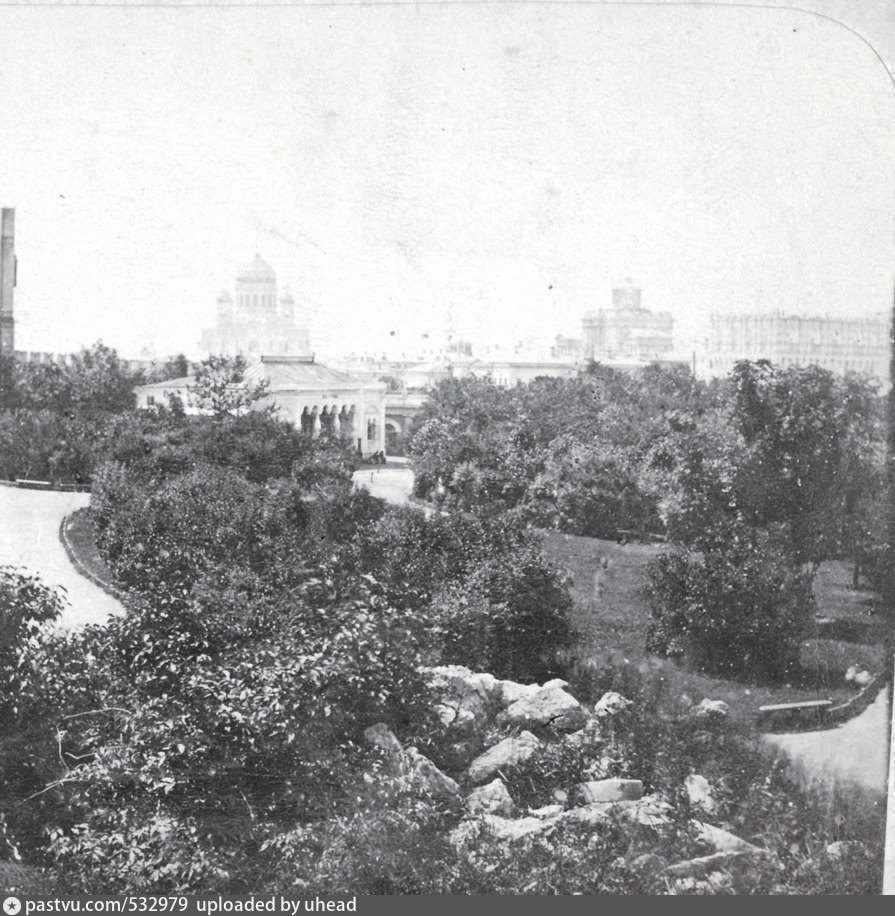 And on the engraving of the 1853 year (I Sharleman, 1824-1870), the top platform of the grotto with the sitting visitors is also clearly indicated, but … again there are no lions. 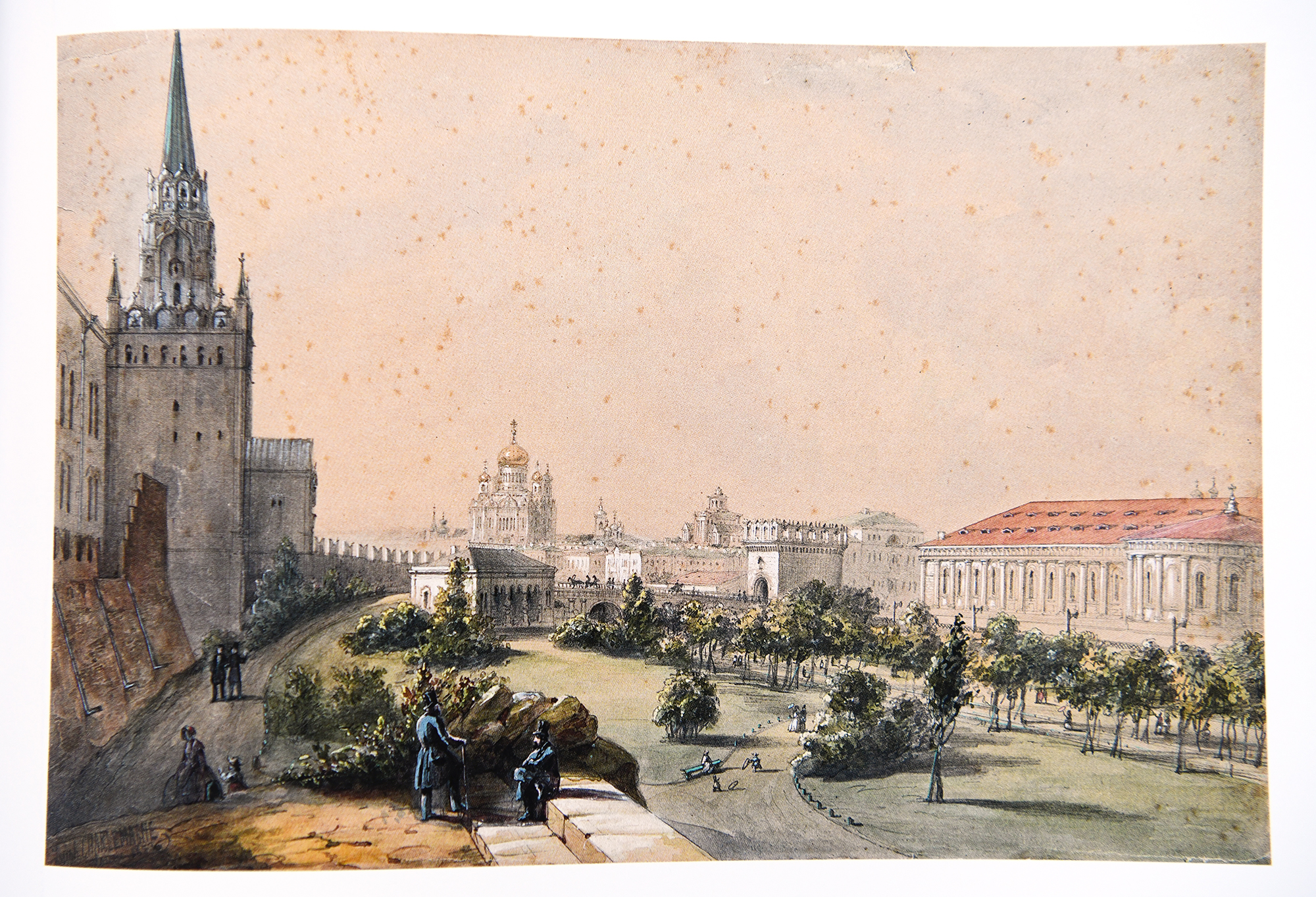 And, finally, engraving already of the middle of the 19th century (the Cathedral of Christ the Savior is not yet erected) also does not allow to assume the presence of «flanking fence» of lions.

The project expresses great gratitude to the staff of the photographic department  of the Shchusev Museum of Architecture, who kindly provided an opportunity to get acquainted with their archive. Not a single photo of the beginning of the 20th century of the grotto «Ruins» found lions. Photos, which firstly appear lions on the grotto «Ruins», date back to 1959-1960 years, which corresponds to the Kremlin museum (see above).

Perhaps, among the documents of the Expedition of the Kremlin building, some materials have survived, which allowed the specialists of the specialized restoration workshop of the “Mosproekt” Institute to recreate lions in the grotto “Ruins” in the middle of the 20th century. These documents (if they exist!) are not known for our project. So, relying on the above photo documents (and other graphic images) only, we can assume that the presence of lions on the grotto «Ruins» looks like foreign, incorporated «smear», distorting original the author’s look of the grotto, conceived by Osip Bove. By the way, we note that in the guides of the late 19th century there is no mention of lions on the Italian grotto of the Alexander Garden.

But on this the  «secret» of these two lions from the Alexander Garden does not end ….
So if it is possible to state (with a high probability) that according to Osip Bove’s idea there were no lions at the grotto, then the question should  be stated.  What  analogue has been used to “recreate” the current «inhabitants» of the grotto  (lions) «, as the documents cited above indicate? It turned out that these analogues now «live» just a few hundred meters from the Alexander Garden, on Vozdvizhenka street, in the courtyard of the Museum of Architecture named by Shchusev.

The paired photographs of a lion from the Museum of Architecture and from the Alexander Garden are presented below.

Indeed, the simplest comparison, so called  «with the naked eye,» shows that, firstly, there is obviously a complete similarity of the pose, secondly, all the lions have completely identical ancient Egyptian royal headdress — the claft. Further more — no doubt the identity of the «facial expression», the same «solution» of the claws down to the claws, the position of the tail. And even more convincing evidence: the «decoration» (or the lower part?) гnder the ear … and the same number of teeth indicated in the mouth. It is clear that there is a different state of the stone, but with  the photography increasing, the some partially lost details on the figure of the lion from Vozdvizhenka are «readable» and, recreated on the figures of lions from the Alexander Garden

Thus, there is every reason to believe that both the «Ruins» grotto and the yard of the Museum of Architecture have the same lions created by stone carvers at different times. Lions reclining on the grotto «Ruins» in the Alexander Garden — it’s just a modern copy of historically lions from the Museum of Architecture. And their «motherland», as it is indicated by a sign in the courtyard of the museum — the estate of Kheraskov-Razumovsky, also know as  “English club” on Tverskaya

When it comes to the homestead of Kheraskov-Razumovsky, first of all, remember the famous «lions on the gate,» about which Pushkin wrote in the novel «Eugene Onegin.» But they appeared under Lev (Leo) Kirillovich Razumovsky at the beginning of the 19th century only. But these lions are statues of the 18th century, and according to experts of the Museum of Architecture, were taken out from … the garden of this manor in the 30s (?) years of the 20th century. The garden once extended beyond the manor to the present Trekhprudny Lane. Since 1935 on the territory of the Donskoy Monastery after the establishment of the State Scientific-Research Museum of Architecture named by A.V. Shchusev has housed its exhibits. It was here that the lions were taken out of the garden of the estate of Kheraskov-Razumovsky. But already in the 90th years of the 20th century, when the territory of the monastery was transferred to the hands of the ROC, the exhibits of the museum, including these lions, were moved to Vozdvizhenka.

A huge gratitude to those staff members of the museum, real “brother-in-arms” who managed to literally save in the late nineties of the last century priceless monuments of history and culture. In this photo, the very moment when the lions from the estate of Kheraskov was transported to the Vozdvizhenka courtyard from the Donskoy monastery is preserved for history.

What a difficult story hides behind, it would seem, such a well-known monument in the heart of Moscow. Obviously, this valuable monument for Moscow actually has now a new look, somewhat different from its original, conceived by the great Osip Bove.
No less surprising is the fate of the lions from the estate of Kheraskov-Razumovsky. They, these lions, visited the 18th century and in the garden near Trekhprudny Lane, and two centuries later in the Donskoi Monastery, and now in Vozdvizhenka. And their modern «clones» have for more than half a century already been put on guard at all «not their» historical monument — the Italian grotto «Ruins» of the Alexander Garden.