Masks (mascarons) of lions often used in the early 19th century are quite understandable. Gavriil Tikhonovich Zamaraev, outstanding master of decorative and monumental sculpture worked and collaborated with many architects at this time in Moscow. He designed not only unique sculptural orders (Moscow University, the Armory Chamber, Ostankino Palace, etc.), but also made (molded by pattren) in his own sculptural workshop these all the same mascarons with lions. Here are two examples of mascaron-twins with a lion from Zamaraev’s studio: 1st photo — the building of the University on Mokhovaya. The 2nd photo is a mascaron on the facade of the mansion of Kheraskov-Razumovsky on Tverskaya.

If you specify the Category — Mascaron (or  Mask, if the image is not located on the capstone) on the project site www.mascaron.org  and the Object  — Leo, then you can easily find other twins of these lions. Some may have insignificant differences, but their «relationship» is beyond doubt. It can not be ruled out that some mascarons appeared on the facades and much later — at the end of the 19th and even the beginning of the 20th century. Most likely, for their manufacture, they used casts from Zamaraev’s «native» mascarons. So, such a mascaron appeared on the facade of the house 31 in Staraia Basmannaya only in the 20th century (during what renovation — 1913 or 1946?)

Cooperation of sculptor Zamaraev  with different architects and replicating his studio  masks explains the appearance of these «twins». But there are other less obvious «stories». So, a remarkable coincidence can be found at the buildings on Novaya Basmannaya, 28 and at Prechistenka 28. The first building  — the profitable house of 1905 was built by the architect N. N. Zherikhov, the second — in 1906 by architect L.N. Kekushev. Indeed, not only buildings numbers 28 (:) ) relate these two so different and each in its own remarkable buildings. It’s hard not to agree that male images (except for small details — different length of hair style 🙂 ), decorating the facades of these buildings are almost identical. Photos — New Basmannaya 28 (NN Zherkhov),  Prechistenka 28 (architect LN Kekushev). Who is the author of these sculptural elements of the facade decoration, and how it happened that two outstanding architects «repeated» the same image requires additional studying. Such a coincidence is all the more surprising because both architects designed (ordered ?)  unique facade decoration for almost every project.

But not only individual masks have their own «doubles». Here is an example of twins — compositions. It is noteworthy that not only complete coincidences occur, but also partial use of the elements of the composition. So the panel in Plotnikov Lane 3, Ermolaevsky Lane 4, and on Sofiyskay Naberezhnay, 22 are completely identical.

But in the compositions in Maly Mogiltsevsky Lane 4 and in the 1st Basmanny Lane 6 there is no figure of a dancing girl.

Note there is a panel in Skaterny Lane 5 in which only two figures are «quoted» — a dancer and a dancing couple, but there is a «new» own pair.

In the following photos — one more example of twins — compositions. Malyi Palashevsky 7 and Verkhnaya Radishchevskaya street 11.

Here is another example of such panel-twins. In contrast to previous ones, based on their earlier samples of classical works of art ), these compositions date back to the beginning of the 20th century. Krivoarbatsky lane.  13 and Malaya Bronnaya Str. 22

On many buildings that are related to the sphere of «business» (bank buildings, own or profitable houses of industrialists or merchants, trade associations, etc.) the image of Mercury (Hermes) — the God of Trade was used to decorate the facades. And in this case, you can easily find duplicates. For example, the Mercury mask on the building of the Profitable House of the Moscow Merchant Bank (Ilnka 14, 1820s-1830s, architect OI Bove, 1894, architect B.V. Freidenberg) and Mercury on the building in Plotnikov Lane 3 (profitable house P.D. Akhlestysheva and RG Kravets, 1910-ies, architect RG Kravets). Our project is not exactly known the authors of these sculptural works.

But what is even more amazing …. In the city of Orel on Moskovskaya Street 26 – the building of the merchant V.V. Appolonov, built in 1897, supposedly the architect Mikhail Mikhailovich Puhalsky, Mercury exists too. Even with damaged wings (yet the Orel suffered during the war) does this Orel’s  Mercury remind of our two Moscow Mercury? 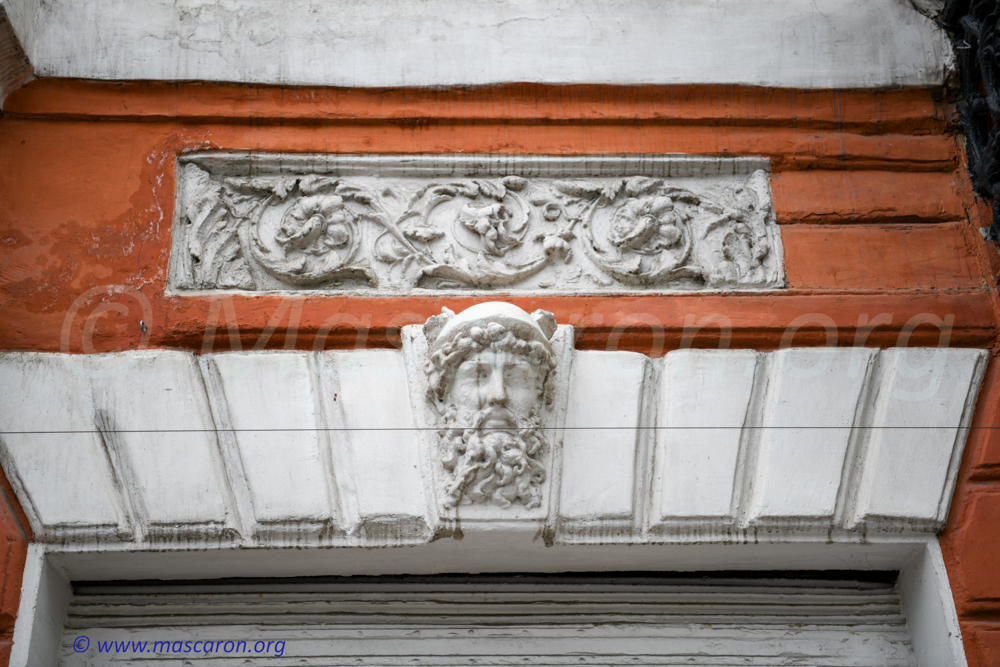 (By the way, on the doors preserved, according to Orel local historians, it is native carved wooden masks of lions the end of the 19th century!)

Here, in this post  there is a small and far from complete list of «doubles» on the Moscow (and not only) facades.   By specifying a certain type of object in the Gallery mode on www.mascaron.org, it is easy to find more matches within the Garden Ring.

If the names of architects can be easily found in different web sources, this, unfortunately, can not be said about the sculptors who decorated the facades of their buildings. It is only in special studies and scientific works that one can learn not only about the sculptural studios of G.T. Zamaraev, I.P. Vitali, but also about such masters of the first half of the 19th century, as  I.T. Timofeev, Santini Campioni, B.I. Orlovsky, Salvatore Penn, I.E. Emelyanov, I.L. Meshkov et al. ( Tsaryova S.М. Sources of scenes of sculptural decoration on the facades of Moscow buildings in the style of neoclassicism (late 19th — early 20th century) // Architectural heritage. Issue. 63. St. Petersburg: Kolo, 2015. P. 109-119  http://www.archiheritage.org/items/101/76/istochniki-syuzhetov-skulpturnogo-dekora-na-fasadah-moskovskih-zdanij-v-stile-neoklassitsizma-konets-XIX-nachalo-hh-v.html )  Also in the special literature and scientific works you can find references to the masters of the second half of the 19th century — the beginning of the 20th, some of which could inherit the workshops, in part even the forms (pattern) of their predecessors.  In Moscow worked and owned their studios  such masters as: N.A. Zakharov, SA. Pozhiltsov and A.P. Chernyshov, V.L. Gladkov and V.A. Kozlov (AS Kozlov), Georg Paul. And some sculptors, carried out orders to create a facade decoration from these studios, for example, S.T. Konenkov — from  of  studio of «V.L. Gladkova and V.A. Kozlov».  Working with many architects, these studios created unique decoration project (for example, on the facade of the house 14 in Ilyinka — the work of Kutyrin’s workshop), as well as  used «typical» molds (pattern) for casting facade decoration. This explains the appearance of  «twins» on the Moscow facades, some of which, apparently at the request of customers, were used in other cities of Russia.