Pashkov House and a neck of the bottle!

“At sunset, high over the city, on the stone terrace of one of the most beautiful houses in Moscow, a house built about a hundred and fifty years ago, there were two: Woland and Azazello. They could not be seen from the street below, because they were hidden from unwanted eyes by a balustrade with plaster vases and plaster flowers. But they could see the city almost to its very edges.”

Perhaps one of the most beautiful examples of classical architecture in Moscow can rightly recognize the Pashkov House, known to many and how Leninka (Lenin Library), and now, who has not yet learned — the Russian State Library.

In 1972 for the visit of Nixon (he was a president of the United States) it was ordered to ennoble Moscow en route of Nixon. And the entrance to the Kremlin, as now, was  through the «Borovitskiye» gate from the «Big stone bridge».  What Nixon could see in this fateful moment ? Right on the way from Big Stone Bridge —  between the «Borovitskaya» tower and the Pashkov House a quarter of older, likely post-fire,19th century (probably and 18 th century) small buildings and private residences was located . They were partly rebuilt in the first half of the 20th century, and, unfortunately, they had a very unsightly appearance. As they say, exactly for the visit of Nixon , it was decided simply to demolish the part of the quarter and build in its place a green lawn. For the luck opened with that solemn view to the Pashkov House, of course, could not but attract the attention of overseas visitors, strengthening the impression of the greatness of the city jointly with the Kremlin view.  So for some time Moscow had kept the name — «lawn Nixon.» 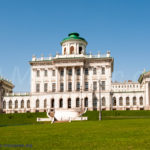 View the location and objects on a map at this link — http://mascaron.org/?pid=1737 (to see the panorama of the street, use the option StreetView — drag the yellow man on the street next to the object)

View of the Pashkov House which the lawn has opened is really wonderful. Unfortunately, today this view as well as a truly unique Moscow image of  Kremlin viewing from Pashkov House belvedere will not lead already see … Perhaps years of commercials through … let say «xxxty» (for the visit of the new foreign guests 🙂 ?) the lawn will be cleared of all new » alluvial» … Who knows ?

There is one other amazing view at the entrance gate, resembling a small triumphal arch, the courtyard and the main facade of the Pashkov House from the Starovagankovskyi lane.  Fortunately this sight is not one man deceive anyone now. Therefore, there is not anything alien to spoil the sight and it still retains its architectural originality, reflecting the history of place. On the old plans plot clearly shows the original form of the courtyard formed by the walls widening from the entrance gate, which converted then in a semicircle in front of the main facade. The resulting remarkable shape, indicated on the plane by a color is definitely reminiscent of the bottleneck.

This is a look to the bottleneck of the windows of the house at the present time. 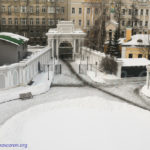 And most likely it is not just a matter of chance or features of the site. The fact is that the customer is at home — Peter Egorovich Pashkov, son of the batman of Peter I, Captain-Lieutenant of the Life Guards Semenov regiment, going into retirement, engaged in the mercy of wine. Mercy of wine is a kind of system of collection of indirect taxes, at which the right to trade in wine was given at the mercy of private entrepreneurs.  The entrepreneurs paid to the Treasury a predetermined amount, and have themselves profited from selling to consumers. By the way, the mercy of themselves were sold at auction every 4 years. The point, apparently, was profitable, and Pashkov managed to «earn» at the mercy of a vast fortune, which allowed him to buy a unique site opposite the Kremlin and ordered the construction of his wonderful home. The house was built in 2 years — in 1784-1786 years. History is silent whether Pashkov ordered the bottleneck, or it is a kind of «gift», a hint of the architect on the origin of the customer’s vast fortune.

Not only the house was severely damaged in the fire in 1812, but also its archives, so the authorship of the project Vasily Bazhenov (and possible management of construction Mikhail Kazakov) likely now ascribed to them couldn’t not be documented. Osip Bove engaged post-fire restoration in 1815-1818. And a little later, in 1841 the interior space has been converted for the Noble Institute hosted here. Then, Rumyantsev Museum, and the Library of Moscow State University with reading rooms  were hosted in the House.

A wonderful sample of white stone carving at the entrance gate — Mascaron Lion, apparently has avoid any alterations, and still continue to delight few passers-by Starovogankovskyi lane in its original form. 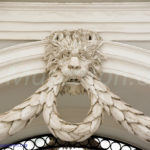 This Mascaron as well as lion masks, located on the facade of the house was made in the sculpture studio of Gavriil Zamaraev. Lion on the facade holds in its mouth a ring that may have different symbolic meanings: the Masonic sign of silence, mystery guard (which can not be excluded, remembering the Moscow’s rumors concerning Bazhenov’s belonging to one of Masonic lodge), or the symbol of subjugation, suppression of a forces. 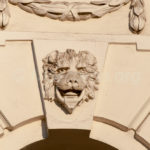 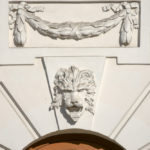 (The photos were taken in different lighting conditions, which explains the differences in the color of the facade)

Besides these unusually expressive mascarons lion at the entrance gate a vegetable garlands, that Grabar called «sonnet garland» attract attention too. Incidentally decorations on the columns in the form of small sprigs of hops made on spacers, and with the wind, they swayed slightly. There is another interesting detail of the entrance gate of the Pashkov House: instead of special stone pedestals (which protect the walls from the wheels of carriages)  here in the ground dug barrels of guns of 1812 … You can literally touch history! 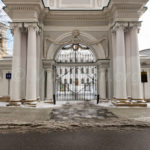 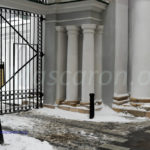 On both fronts Pashkov House — the main and overlooking the Kremlin-on bases of the portico columns allegorical sculptures are installed — 4 ancient female figures. In the 80-90s of the 20th century Pashkov House actually began to break down, mainly due to the works on construction of the subway station, Leninka withdraw their funds, and the house turned out to be almost abandoned. Preserved memories that some fragments of sculptures on the facades porticoes were lost at this time. House died. It is said that none other like Zhirinovsky publicly drew attention to this outrage. Some even attributed the statement to him: «Shame! Opposite the Kremlin! Let me, if they themselves can not! «. Suddenly a budget  were found, and the repair work finally began. Repair and restoration work, and then the Library return into Pashkov House ended only in 2007. If you look closely at the statues, you may notice some «schematic» (and not antiquity 🙂 ) faces which dissonant with the figures themselves. Old photographs of the early 1900’s did not allow to pinpoint and identify fragments of sculptures lost and then recovered, but it couldn’t  be excluded that it is a heads were recreated during the repair work of the 21st century. 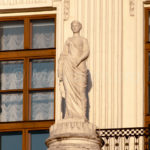 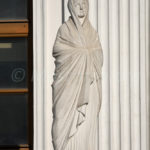 They say that when at the beginning of repair work in the 2000s a huge, deep «well» (or underpass?) was found in the courtyard of the Pashkov House, and  one of the officers of the Library have seen in the masonry walls of the «well» ancient manuscript. There were also even some publications of the library of Grozny, to which supposedly could drive the move — no matter how how, but Ivan the Terrible included this ownership (Vaganova) into the oprichnina courtyard  built in the neighborhood. But soon, the whole topic went «down» with allegedly  underground passages into Kremlin direction  poured by concrete according to disposal of «relevant services».

With the Pashkov House and literary legend is connected — it is believed that it is on the belvedere of Pashkov House where one of the final scenes of the novel «The Master and Margarita» occurred — Woland and Levi Matthew conversation. In fairness, it should be recognized that as well as the house margaritas and tram on Partiarshi (http://mascaron.org/2016/11/08/225/ ), it is rather an artistic image than the exact geographical point: some researchers had «calculated» the impossibility of  described in the novel motion shadow of swords Voland existence during the meeting on the roof of the House of Pashkova. But the sight of the Kremlin and the city was for sure (unfortunately, it — was!). «Resting his sharp chin on his fist, hunched on the stool with one leg drawn under him, Woland stared fixedly at the endless collection of palaces, gigantic buildings and little hovels destined to be pulled down.» As if  Buglakov foresaw already the demolition of the quarter for the visit of Nixon ! 🙂

Preserved also memories that Gogol, after visiting the belveder of  Pashkov House, compared the view opened to his yies with overlooking the Eternal City. There is also «three emperors» legend  — Frederick William III and his two sons (later — Friedrich Wilhelm IV and Emperor William I.), who, admiring the views of the Kremlin and the Moscow with Pashkov House belveder, knelt with the words «This is it our savior! «. So they thanked Russia in 1818 for the rescue from the Napoleonic domination. But in 1818, have not yet resulted in restoration works in the Kremlin after the destruction and fire of 1812. So Filaretovskiy extension and belfry of «Ivan the Great» bell tower were actually re-recreated only in 1819 only!  But the legend continues to exist, and now the facade balcony (not belveder!), overlooking the Kremlin, came to be called «balcony of the Three Emperors.»

In 1934, during the expansion of Mokhovaya Street was almost completely eliminated yet remained partly the garden, laid out in front of the facade of the Pashkov House. Its dimensions can be clearly present in the above terms. In 1934 and was attached to the ladder, as it were, connected the house with Moss, but which can not enter the house. Still need to climb in Starovagankovsky lane and go through the bottleneck to get inside the house. What’s that, and only the bottle neck has gone through all the hardships and restructuring Pashkov House!

In 1934, during the expansion of Mokhovaya Street was almost completely eliminated yet partly remained the garden, laid out in front of the facade of the Pashkov House. Its dimensions can be clearly viewing in the plan above. In 1934 special. pretty nice staircase was attached, it looks like the staircase «connected» the house with Mokhovaya Street, but on which can not enter the house. It is still needed to climb in Starovagankovsky lane and go through the bottleneck to get inside the house. What’s that, but the bottle neck has survived and has gone through all the hardships and restructuring of Pashkov House!