Come and see the…!

Surprisingly, for some reason, almost all visitors to the Moscow Kremlin, passing  through the Brovitsky Tower into the Kremlin , do not pay attention to the «amazing is nearby» 🙂 . Literally right above the checkpoint for tourists at an altitude of about 15 meters, you can examine in detail a unique white-stone carving  of the 15th century!

But, let’s go in order … in 2014 in the magazine «Russian Archeology» published Dmitri Arkadyevich Petrov results of the study of this and two neighboring white stone carved blocks («White stone coats of arms on the Borovitsky tower of the Moscow Kremlin.» Results of preliminary inspection. «D.A. Petrov, D/E Yakovlev, «Russian Archeology,» 2014, No. 3, pp. 147-155). According to the analysis of the cement slurryand the features of the masonry, dating of these blocks was established — 1490 year. The blocks were built into the walls of the tower in the time of  Pietro Antonio Solari directly during the construction of the Borovitskaya tower.

In the first two photographs — the general (modern) view of the Borovitskaya tower and its original «combat» view of the 15th century — the current lower level. It is in this place of the Borovitsky Hill that the Kremlin wall makes a small bend, and so it was possible to «place» naturally on the walls of the tower three white stone blocks looking outwards, on the Kremlin walls suitable for the walls.

Such kind of samples of white stone carvings on a civilian building of the 15th century in Moscow, it is perhaps difficult to find. What, except that and their dating these white stone carved blocks are remarkable? All three blocks contain heraldic images. (on the map of the «Hidden City» project the location of the blocks is indicated exactly — http://mascaron.org/?pid=1356 ). 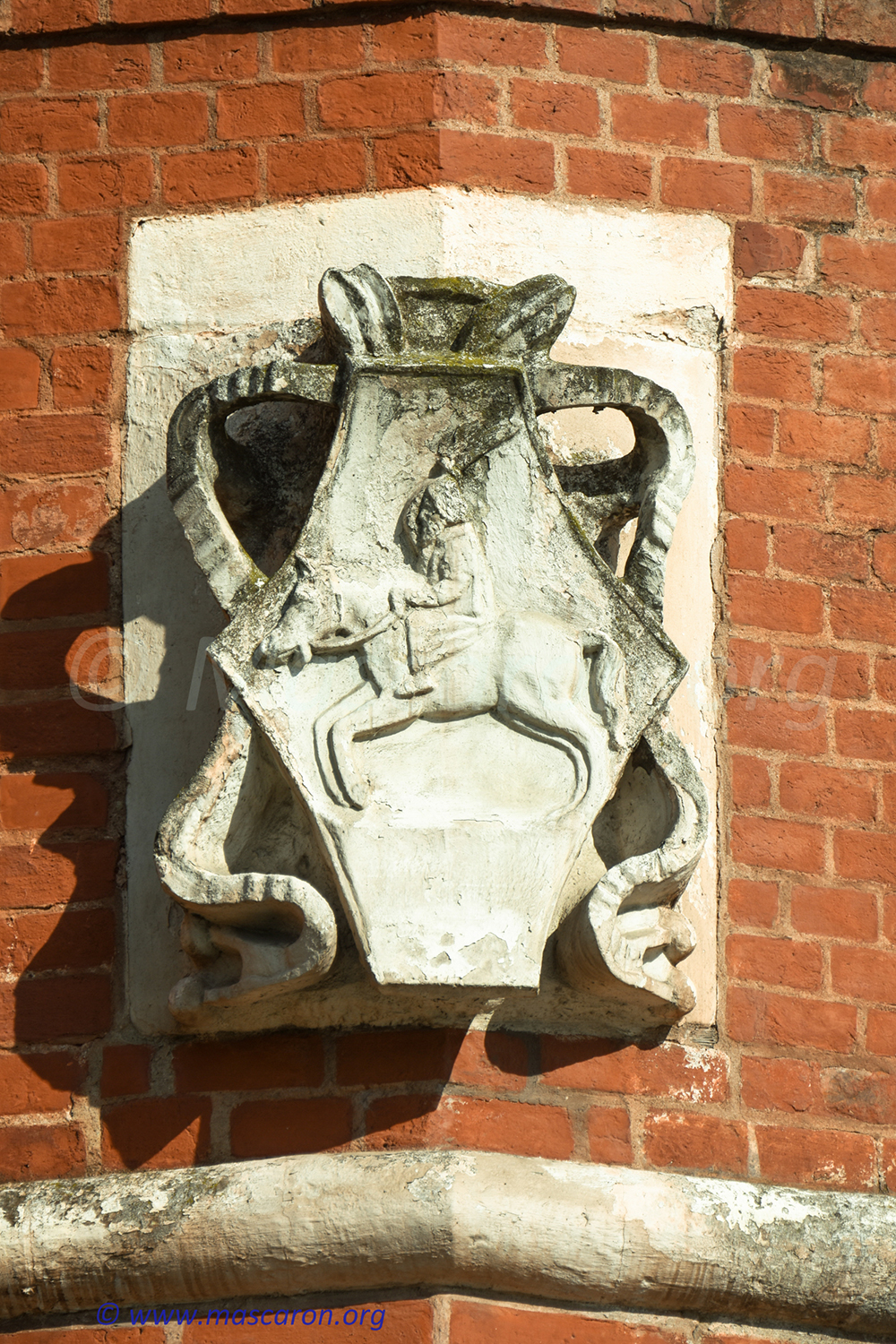 On the left block there is a rider with a saber raised above his head. 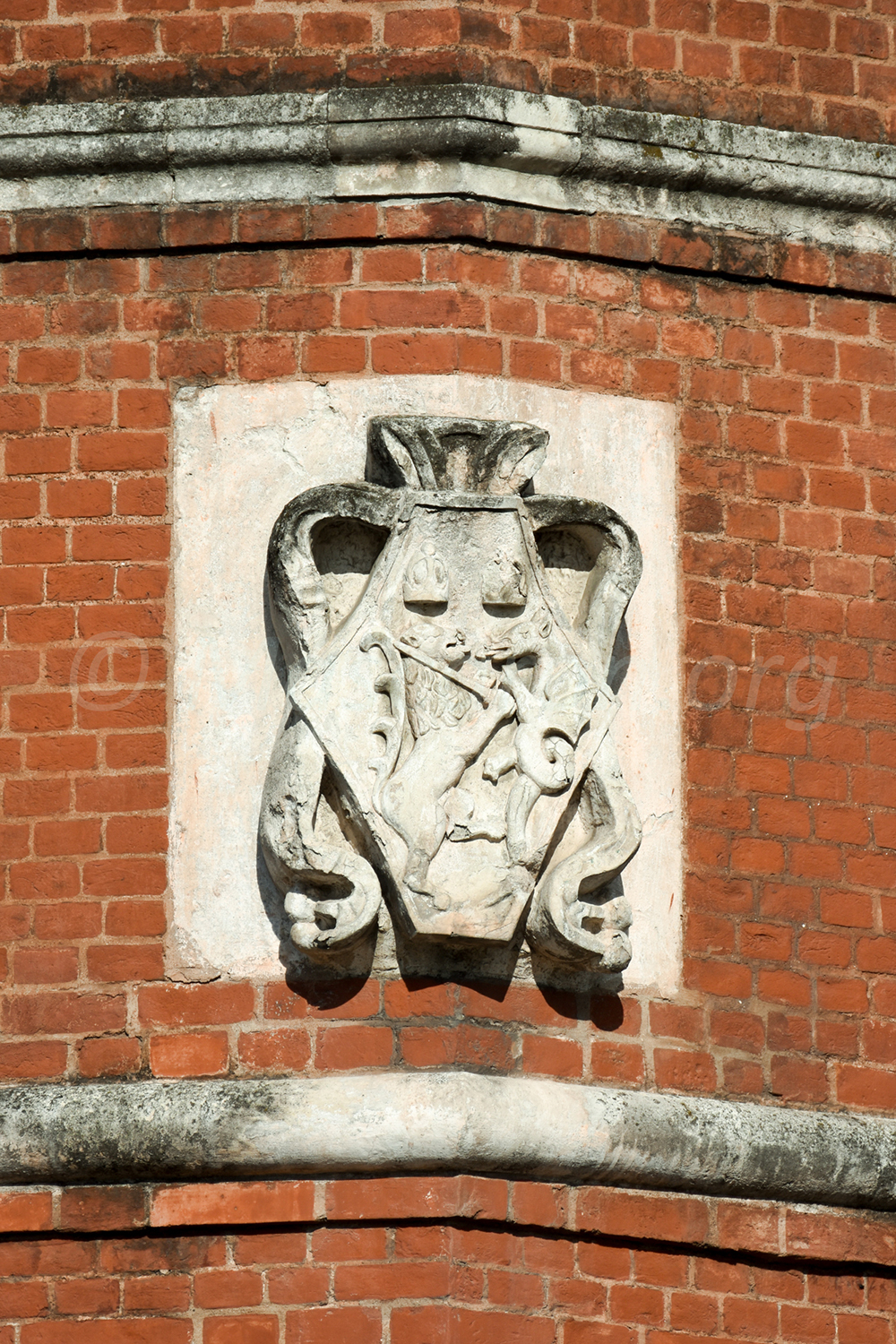 On the second, the opposing lion and the winged serpent. 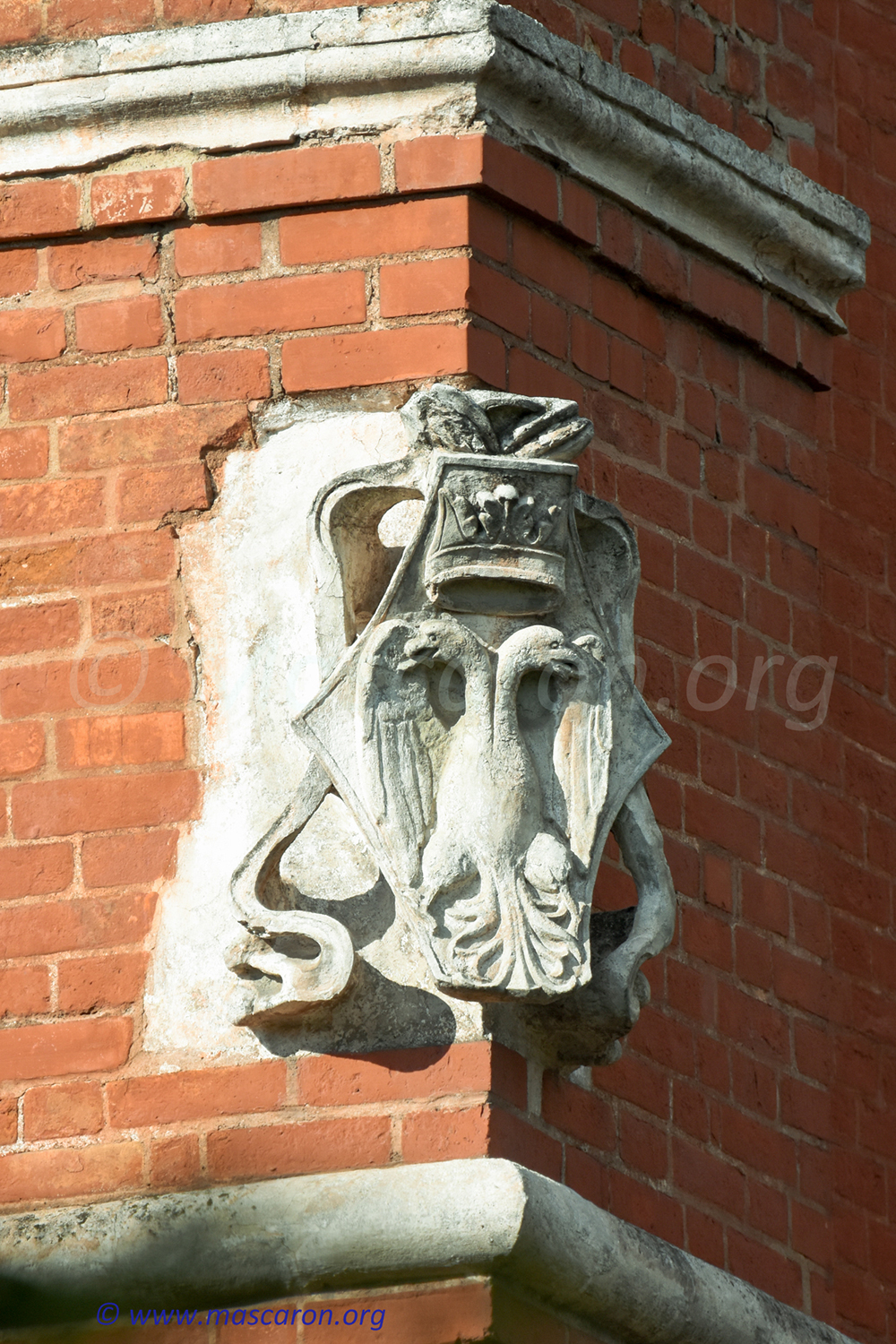 And, finally, on the third, right block, there is a double-headed eagle under the crown. Recall that, as is commonly believed, the first extant heraldic image of the two-headed eagle, as a state symbol of the Moscow principality, occurs on the print of Ivan III the Great’s seal of 1497. Thus, now it is fair to increase (at least) by 7 years the age of the Russian double-headed eagle. The heraldic eagle carved on the block of the Borovitskaya tower dates back to 1490.

And what are the other two heraldic signs and what relation do they have to Ivan III and the Moscow principality? The «snakefighter» is a horseman with a spear strike a dragon — is a well-known symbol, which is associated with the Moscow princely family of the Rurik people. A rider with a saber raised above his head («chase») is a patrimonial sign of Gediminovich, the rulers of the Lithuanian principality. A winged snake — it is generally a symbol of the Kazan Khanate (but it is known only from the end of the 16th century in this capacity). Until recently, it was believed that the appearance of these symbols on the Borovitskaya tower in 1490 was due to the military and political success of Ivan the Great in opposing the Lithuanian principality and the Kazan Khanate. So literally in 1487 Kazan surrendered to the army of Ivan the Great, who made another campaign against Kazan.

But the research of Yevgeny Vladimirovich Pchelov makes it possible to make another, logically, more reasonable assumption concerning such decoration of  Ivan the Great his own family castle (the Kremlin) . «Perhaps these heraldic images are the emblematic heritage of Ivan III on different genealogical lines.» Considering these three signs as a single emblematic complex, E.V. Pchelova paints attention to the following facts. On Sophia Vitovtovna  clan line, Ivan the Great could inherit Lithuania Grand Dukes symbol — a rider with a raised saber. The two-headed eagle is the legacy of Sophia Palaeologus.  And  «image of the central coat of arms (the lion with the serpent) has an approximate analogy with the depiction of one of the types of personal seals of Basil II and Ivan III (a lion torturing a snake)» (Pchelov E.V. “About the double-headed eagle in Rus before the seal of 1497 / / Ancient Rus”: questions of medieval studies No. 3 (53), September 2013. P. 111-113).

Obviously, not only the shape itself of these signs, in general not  characteristic for  Moscow, chosen to accommodate these heraldic signs is of interest. In this connection, let us quote the opinion of the Russian architect and N.V. Sultanov, who in the 19 century in his  book dedicated to the monument to Alexander II, drew attention to these blocks shape. «It is curious that they survived on the Borovitsky gates on both sides of the entrance arch, where they were brought by the Italians, the builders of the Kremlin. These shields, in their general form, are nothing more than a metal forehead of a horse, and are thus a remnant of knightly horse equipment. » («Monument to Emperor Alexander II in the Moscow Kremlin», St. Petersburg, 1898)

In 2014, experts stated their opinion  on the advisability of transferring unique white-stone blocks to the Kremlin museum storehouses, and replacing them with copies on the Borovitskaya tower itself. Now, as you can see in the very first photo «H-hour» comes — soon the grid will cover Borovitskaya tower. But what we will see here in future  is only to be assumed.